The 'Only Girl (In the World)' songstress casually shows off her bare baby bump while taking a romantic stroll with her soon-to-be baby daddy in New York City.

AceShowbiz - Rihanna is officially having a bun in the oven. The Barbadian songstress is currently expecting her first child with her rapper boyfriend A$AP Rocky, whom she has been dating for over a year.

The couple let the cat out of the bag during a romantic stroll in New York City over the weekend. In several pictures which landed online on early Monday, January 31, the "Umbrella" hitmaker proudly bared her baby bump.

Rih and Rocky were spotted out walking on Friday, January 28. During the outing, the soon-to-be first-time mother made no effort to hide her burgeoning belly, letting it show from her bright pink coat which was partly unbuttoned without a shirt underneath despite the freezing weather.

The Savage x Fenty designer paired the stylish jacket with light-wash jeans with holes on the knees. She accessorized with a gold body chain featuring a cross and colorful jewels which adorned her belly.

Rocky, meanwhile, kept himself warm in a three-layered outfit that included a white T-shirt, a cream-colored sweater and denim jacket. He also wore a black beanie, with black pants and boots in matching color. 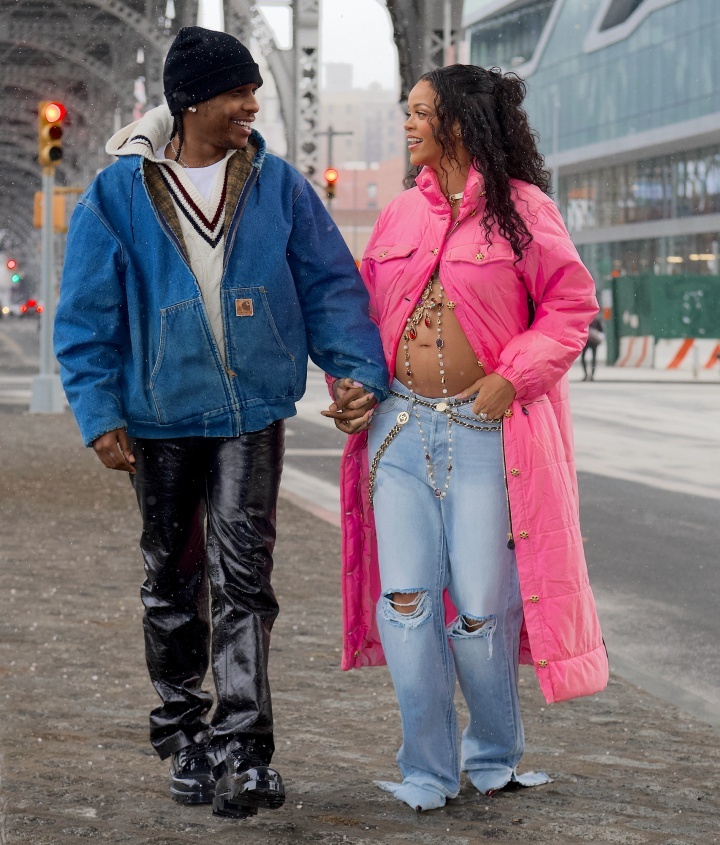 Rihanna flaunted her baby bump during a romantic stroll with A$AP Rocky.

In one of the snaps, the pair looked so in love as they were all smiles while looking into each other's eyes. Another showed the "L$D" rapper sweetly planting a kiss on his girlfriend's forehead while putting one of his arms around her shoulder.

Rihanna and Rocky were reported to have started dating in November 2020, although it's not until May 2021 that the former A$AP Mob member confirmed their relationship in an interview with GQ. Calling the "Diamond" singer the "love of my life," he gushed about their relationship at the time, "So much better. So much better when you got 'the One.' She amounts to probably, like, a million of the other ones. I think when you know, you know. She's the One."

The 33-year-old emcee has also opened up about his desire to start a family while dating Rih. He said starting a family is "in my destiny, absolutely," as he believed, "I think I'd be an incredible, remarkably overall amazing dad. I would have a very fly child. Very."

Logan Paul Shares Video of Him Getting Bullied by Baboons

Rihanna Would Love to Have More Babies With A$AP Rocky