The 'Mama June: From Not to Hot' star is pictured kissing, snuggling and walking hand in hand with tattoo artist Justin Stroud, who is 8 years her junior, in Los Angeles.

AceShowbiz - Mama June a.k.a. June Shannon has found herself a new man, months after calling it quits with her problematic ex-boyfriend Geno Doak. The reality TV star has been spotted together with her new flame Justin Stroud in public for the first time.

During the romantic hike in Runyon Canyon, Los Angeles on Friday, January 21, the pair showed some serious PDA. The two were photographed holding hands as they strolled side by side while enjoying the pleasant sunny weather in California. 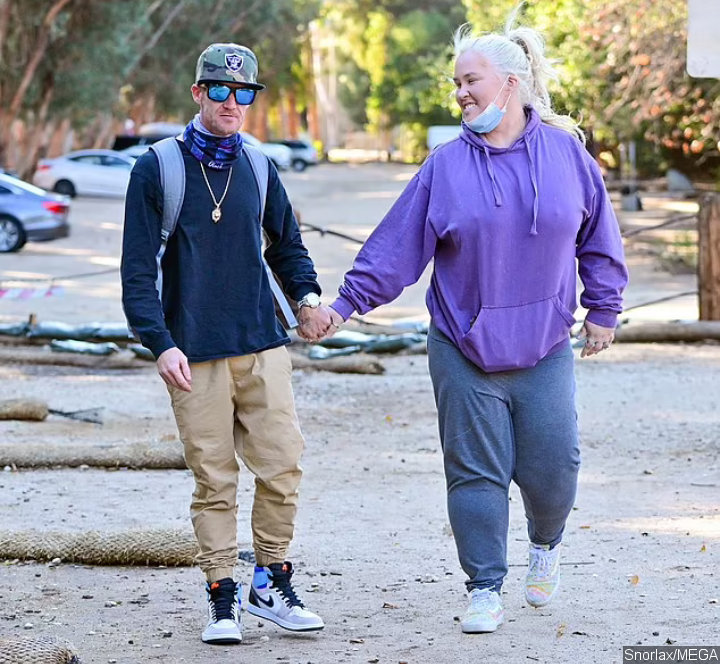 Mama June and Justin Stroud displayed some PDA during a romantic hike.

June and Justin, who is eight years her junior, couldn't get enough of each other as they were also hugging each other with big smiles on their faces. She appeared to be planting a kiss on her beau while wrapping her arms around his neck.

At one point during the hike, the lovebirds stopped for a while to take a selfie. After breaking a sweat, they took a break and sat down next to each other on a bench, during which June was seen embracing her boyfriend again.

For the outing, June went casual in a purple pull-over sweatshirt and baggy gray sweatpants teamed with a pair of sneakers. She also wore a face mask which was pulled down over her chin. The 42-year-old accessorized with some serious bling on her fingers.

As for Justin who is reported to be a 34-year-old tattoo artist, he rocked a black long-sleeved shirt, tan joggers and high-top Nikes. He shielded his eyes from the bright sun with a camouflage-printed baseball cap and sunglasses.

June first revealed she's had a new "boo" in October. At the time, she showed on her Instagram Story a photo of her man's fresh forearm tattoo and thanked the tattoo artist for the new ink. "@princeofink always doing an awesome job thanks for hooking up my new boo with some ink see ya soon," she captioned the video of money-rose artwork. Almost a week later, Justin showed the new ink on his own Instagram page.

June's relationship with Justin comes several months after she confirmed her split from Geno Doak. During a live conversation in August, a friend of the "Mama June: From Not to Hot" star said, "Listen, Geno is not in the f***in' picture."

"You can leave his name out your mother**king mouth," the friend continued, before June interrupted that if people want to know what Geno's doing they can check his Instagram account. "That's his business," she added in the video. "That's not a part of my life, hasn't been."