The Yeezy designer and his actress girlfriend show their edgy style as they step out in Paris following their red carpet debut as a couple at the city's Fashion Week.

AceShowbiz - Kanye West and Julia Fox had a rather spooky date night, no thanks to their edgy looks. The pair showed their eccentric sense of style while stepping out in Paris, France on Sunday night, January 23.

In pictures of their outing, Ye was seen wearing a pair of white contact lenses that made him look like a sort of fictional character from fantasy or supernatural story. The creepy accessories stood out from under his dark gray scarf that covered most part of his face.

The Atlanta native bundled up in a black leather jacket with matching pants. He also wore a pair of chunky black biker boots and a pair of leather gloves in matching color. He put a protective arm around his girlfriend as they walked side by side while being swarmed by fans and paparazzi.

Julia, meanwhile, matched Ye's outlandish look in a red PVC dress with a thigh-high slit underneath an oversized black winter coat. But what stood out the most was her heavy black eye makeup which went all they way to her eyebrows and near the temples of her head.

The actress completed her look with a pair of metallic over-knee silver boots and pendulum earrings. Her brunette hair was scraped back off her face and pulled into an updo. 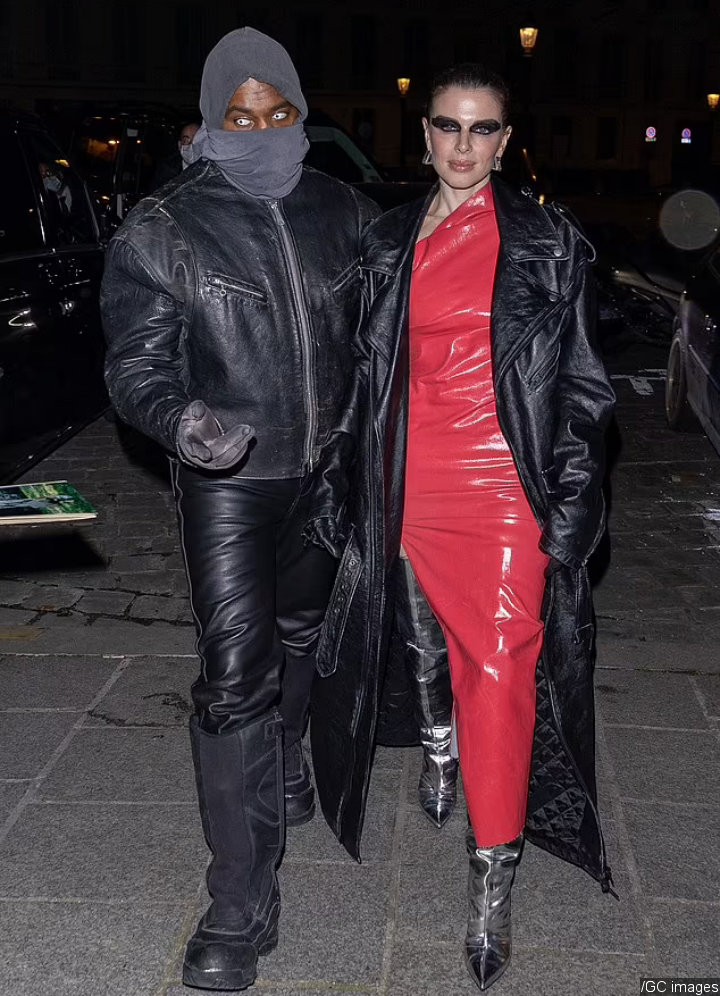 Kanye West and Julia Fox showed their edgy style on a date night in Paris.

Earlier that day, Kanye and Julia made their red carpet debut as a couple at Paris Men's Fashion Week. The couple sported matching denim ensembles while posing for photographers when attending the KENZO fashion show together.

The "Gold Digger" rapper accessorized his outfit with black shades and black boots. The "Uncut Gems" star, on the other hand, flashed her abs in the two-piece Schiaparelli attire while wearing chunky gold earrings and denim boots. The actress also sported winged eyeliner and a dark smokey eye as she kept her long hair pulled back into a bun.

Julia recently clapped back at allegations that she dates Kanye for fame or money. In the Friday, January 21 episode of her her "Forbidden Fruits" podcast, the 32-year-old boasted about her billionaire ex-boyfriends, "People are like, 'Oh, you're only in it for the fame, you're in for the clout, you're in it for the money.' And it's like, 'Honey, I dated billionaires my entire adult life. Let's keep in real.' "