The 'Shea Butter Baby' hitmaker cites racism in an online rant as she's taken into custody in an Amsterdam airport shortly after landing in Netherlands.

She later added, "I'm being arrested in Amsterdam for reacting to a woman racially profiling me."

According to Reuters, Dutch military police, who are responsible for security at Schiphol airport, said Lennox was held because of her aggressive behaviour towards an airline official. <

"Our unit found a woman full of emotions, that wouldn't calm down," spokesman Robert van Kapel told the news outlet. "That's why she had to be taken into custody."

Van Kapel said, police were investigating claims of possible threats made by Lennox during the incident, but did not indicate how long Lennox would be detained.


Details of what happened are still unclear, but Lennox was apparently arrested due to an incident with KLM, a Netherlands-based airline, shortly after landing in the country.

In a series of deleted messages, she ranted, "F*ck Amsterdam. F*ck klm. Never in my life," just a few minutes after sending a friendly "Hi Amsterdam." 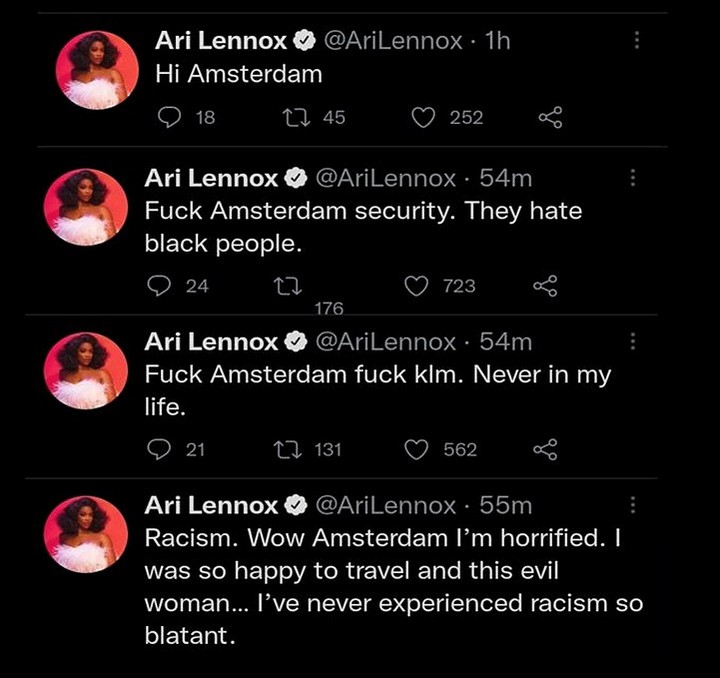 She also tweeted, "Racism. Wow Amsterdam I'm horrified. I was happy to travel and this evil woman… I've never experienced racism so blatant."

Ari Lennox Fusses at Being Taken to Court for Littering