As one of those who celebrate the not guilty verdict in the Kenosha shooting case, the conservative political commentator urges the 17-year-old to sue everyone.

AceShowbiz - It's no secret that Candace Owens and LeBron James are on the exact opposite sides when it comes to politics and ideology. So the author didn't miss the chance to mock the NBA star when the verdict was announced in the Kenosha unrest shooting case.

After Kyle Rittenhouse was acquitted on murder charges on Friday, November 19, the conservative political activist trolled the Los Angeles Lakers star, who has always believed that the 17-year-old was guilty. Taking to Twitter, the political commentator posted a meme of crying LeBron with Kyle appearing to wipe the athlete's tears. 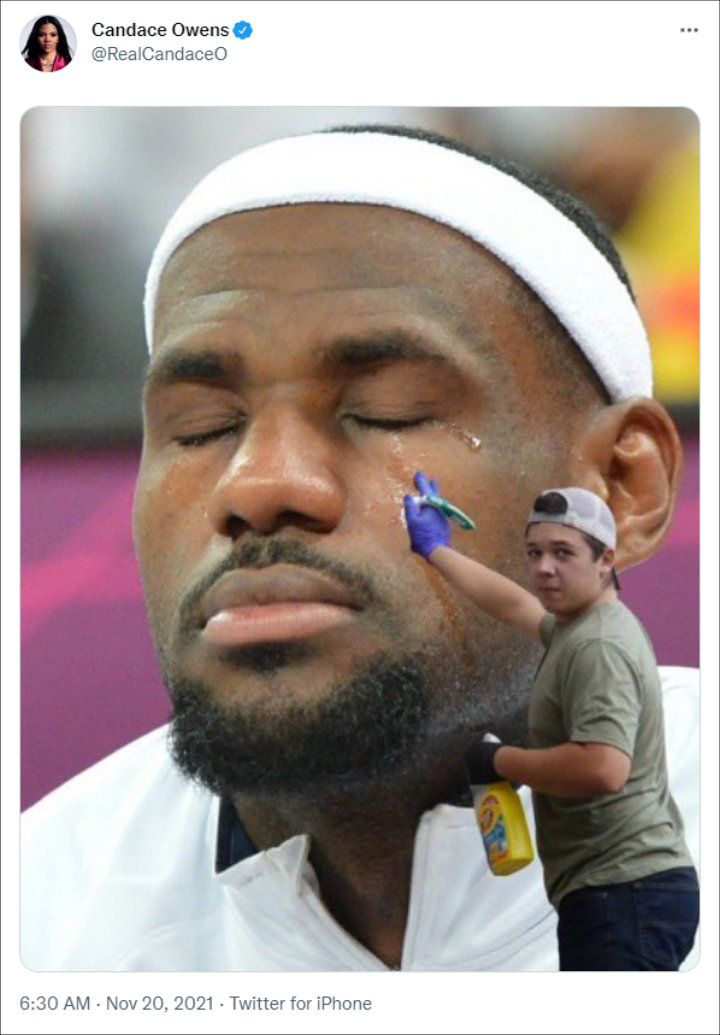 Candace did not provide any caption with the image, but it was a clear reference to how she thought LeBron would feel after the not guilty verdict. Agreeing with her, one of her followers responded, "I like this. He's crying all the time." Another said, "Love this."

Some others, meanwhile, blasted Candance for the offensive joke. "Trying hard to get that back and forward with LeBron to drum up more attention for your media. Rolling on the floor laughing boy that hustle is real. A+ for effort though," one person reacted to the tweet.

Another defended the basketball player, "LeBron James is a modern day Martin Luther King and I find this very offensive." Someone else simply noted that it's "not funny."

Prior to the LeBron meme, Candance voiced her thought on the murder acquittal in other tweets. Celebrating the verdict, she declared, "NOT GUILTY. Kyle Rittenhouse is free. The criminal mob corporate enterprise that is masquerading as a movement concerned about black lives- FAILS. Justice wins the day." She also urged the Antioch teen, "SUE THEM ALL, KYLE. EVERY LAST ONE."

LeBron has not publicly reacted to the verdict, but he previously blasted Kyle for crying during trial. "What tears????? I didn't see one. Man knock it off! That boy ate some lemon heads before walking into court," he tweeted earlier this month.

Candace, on the other hand, had voiced her support for Kyle as writing, "Kyle Rittenhouse is innocent. It was another case of the BLM lynch-media-mob attempting to ruin a person's life (this time, a 17 year old kid) to feed their race-obsessed 'rampant white supremacy' lie." She added, "Journalists and Big Tech are the true enemies of the American people."