The Bucs issue a statement on their social media account after their wide receiver is accused of receiving a fake COVID vaccine card from his former live-in chef Steven Ruiz to avoid NFL health protocol.

AceShowbiz - Tampa Bay Buccaneers have set the record straight on Antonio Brown's vaccination card status. The Bucs insisted that their wide receiver's card is real and "reviewed" after he was accused of receiving a fake COVID-19 vaccine card to avoid NFL health protocol.

On Thursday, November 18, the Buccaneers released a statement via Twitter, stating the franchise received completed vaccination cards from all players during the offseason and submitted all necessary information to the NFL. "Buccaneers statement regarding Tampa Bay Times report," the post began.

"After an extensive educational process conducted throughout our organization this past offseason highlighting the benefits of the COVID-19 vaccines, we received completed vaccination cards from all Tampa Bay Buccaneers players and submitted the required information to the NFL through the established process in accordance with league policy," the statement read. "All vaccination cards were reviewed by Buccaneers personnel and no irregularities were observed." 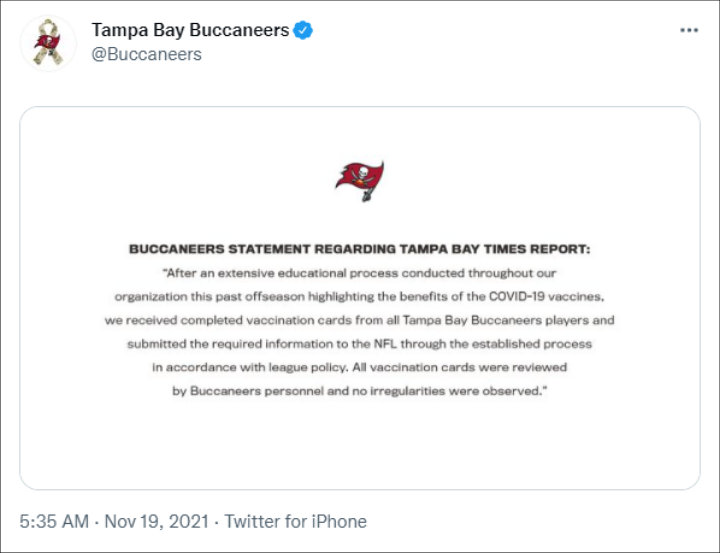 In the wake of the allegations, Brown's attorney, Sean Burstyn, has also issued a statement. Defending his client and denying the accusations, the lawyer stated, "Be like Antonio Brown and get the vaccine."

Brown was accused by his former live-in chef, Steven Ruiz, of obtaining a fake COVID-19 vaccination card. According to a report from the Tampa Bay Times, Ruiz claimed he received a text message from Brown's girlfriend, Cydney Moreau, in early July that indicated Brown was willing to pay $500 for a fake Johnson & Johnson vaccination card.

The publication also provided a screenshot of the alleged text message conversation between Ruiz and Moreau. In it, Moreau said, "Can you get the COVID cards?" to which Ruiz responded, "I can try." Moreau then replied, "JNJ shot. AB said he would give you $500."

Ruiz told the outlet that he was unable to obtain the fake COVID-19 vaccination cards, but when he visited Brown's home a few weeks later, the NFL star showed him fake cards he had obtained elsewhere. Ruiz also claimed that Brown had told people around him that he was worried about the negative effects of the vaccine on his body.

Ruiz said he spoke about this issue now because Brown owed him $10,000, which the athlete has been unable to obtain after settlement negotiations with the footballer's lawyers were unproductive. Following the report, NFL spokesperson Brian McCarthy said in a statement that league representatives were "aware of the report and have been in contact with the club." Brian added, "We will review the matter."

If Brown is found to have faked a COVID-19 vaccination card, there will possibly be serious consequences personally, professionally and financially. Previously, the NFL had fined the Green Bay Packers $300,000 after it's proved that Aaron Rodgers violated the league's COVID-19 protocols. As for Rodgers, he had to pay $14,650. In October, the NHL player Evander Kane was also suspended for 21 games for falsifying a vaccination card.