The 'Don't Get Smoked' MC isn't apologetic for saying that Lul Tim 'wasn't wrong' to shoot the 'Crazy Story' spitter, but claims that his remarks were taken out of context.

AceShowbiz - 600Breezy has responded after receiving tons of backlash for seemingly defending King Von's suspected killer. Not apologizing for his comments, he insisted that his words got twisted and challenged the critics to confront him.

The Chicago native made use of his Instagram Story on Monday, October 18 to hit back at the critics. "Of course they skipped the whole part where I said 'I dont f**k with that n***a and N***AS STILL WANNA SEE THAT N***A FOR WHAT HE DID' but aye," so he claimed.

Still, the 20-year-old is seemingly ready to take the consequence as he added, "If anybody don't like what I say, hit me in my mouth or shut up. Simple. Fans friends anybody [100 emoji] LLKV and f**k Timmy. Now carry on." 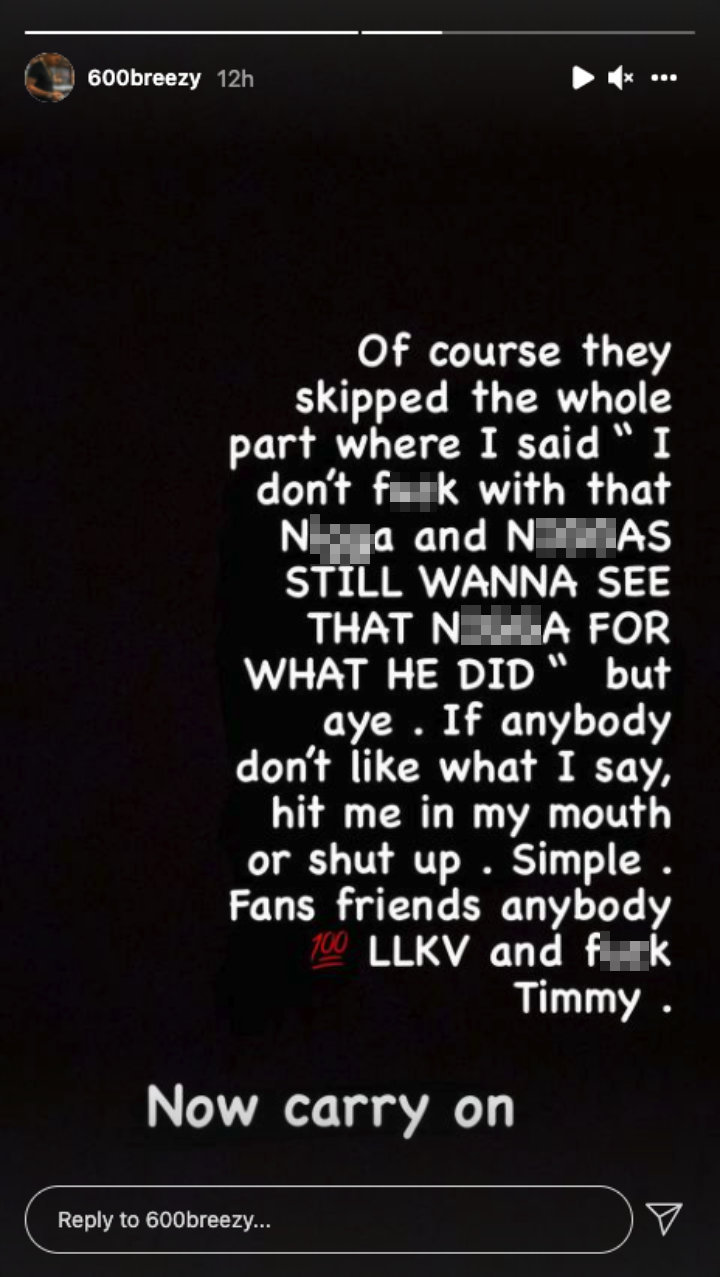 He went on explaining, "Quando Rondo is his breadwinner, so that's just like, reverse the situation. N***as walk up on Von and do that and one of Von's homies just pop out the car and shoot, you know what I'm saying?" Still, he said of the incident, "It was very unfortunate."

King Von died on November 6, 2020 after he was involved in altercation with Quando outside of an Atlanta hookah lounge nightclub. The dispute quickly escalated into gunfire, in which the rapper, whose real name is Dayvon Daquan Bennett, was shot multiple times. He was transported to a hospital in critical condition but died during surgery later that day at 26 years old.

Lul Tim, also known as Timothy Leeks, was arrested and booked into Fulton County Jail in November for allegedly fired the shots that killed Von, but he was released in March this year after posting a $100,000 bond.

Jamie Foxx Vows He Will Never Get Married: 'I Didn't Think That's for Me'

600Breezy Left Fuming by Kidnapping Attempt on His 'Baby Brother'