In her defense against the backlash, the 'Real Housewives of Beverly Hills' star argues on Twitter that 'someone else did [the comparison] and I reposted it.'

AceShowbiz - Erika Jayne just can't escape the criticism for seemingly comparing herself to Jesus Christ. The reality TV star recently defended herself against the backlash over her controversial post, but it only backfired.

Erika initially reposted a fan's Instagram Story that called out one of the lawyers in the bankruptcy case against her estranged husband Tom Girardi's former law firm, Girardi Keese. "This is exactly how CHRIST died," so read the fan's Story that the Bravo star shared on her own social media page.

"The Real Housewives of Beverly Hills" star apparently received severe backlash for the comparison, prompting her to deny that she compared herself to Jesus Christ. "No, I did not compare myself to Christ, someone else did and I reposted it," she tweeted on Thursday, October 7 in response to the criticism. "Now everyone can have a pretend meltdown about it." 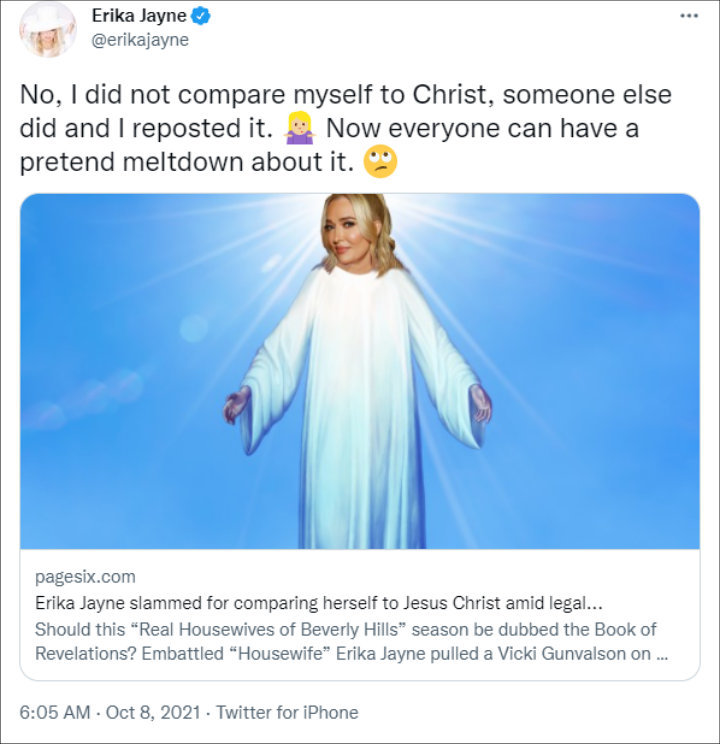 Erika Jayne denied she compared herself to Jesus Christ.

However, people again took issue with her claim, with one advising her, "Please stay of (sic) Twitter, you really are not doing yourself any favours. Reposting it is agreeing to the comparison. Who is your lawyer? let me speak to them, to pass on proper advice AND staying off social media would be my number one advice."

Another pointed out, "Reposting is the same as posting yourself. It means you cosigned it. Seriously, what is wrong with you?" A third critic didn't take the excuse as well, commenting, "…and you're unaware that reposting a tweet w/o commenting otherwise is generally taken as you agreeing with it? Come on…"