Author Briana Hampton doesn't buy the 'Bop' spitter's explanation that he didn't try to woo her, claiming she has the receipt to prove that the rapper makes threats during a phone call.

AceShowbiz - DaBaby has not gotten away with the allegations that he tried to hit on a married woman. Despite his denial, the woman, who came forward with the story on social media, didn't buy his explanation and thinks that the rapper acted like a guilty person by sending her and her husband threats.

On Thursday, October 7, Briana Hampton, better known as Mrs. LaTruth, further addressed the matter on Instagram. "Someone who's innocent isn't gonna send threats," she wrote in one of her Stories.

"This is the last time I'm addressing this.....," she added in a separate posts. "No I don't owe him no apologies!!! It was him. The phone call that was had this morning was nothing like what his publicist told him to get up here and say..."

Mrs. LaTruth claimed she had a receipt of the phone call in which DaBaby allegedly made the threats. "Phone call recorded stay tune for the TRUTH," so she claimed. "Someone who's innocent ain't sending no threats someone who's innocent would've reached out to my husband personally and said it wasn't him he didn't! Instead he had his baby mama call to defend him and later hop on the phone with my husband to send threats y'all can fall for the bs if you want too it wasn't no damn GRAPHIC DESIGNER."

Believing that DaBaby made an excuse that someone faked the DM, the author went on alleging, "So now it's damage control and his team trying to help him fix it for the public. Aint no graphic designer going out there way to send someone who doesn't follow me or know me from a can of paint to create messages for little ole me!!! He got exposed and denied on a public platform I would deny if it was me too!!!"

With that being said, Mrs. LaTruth refused to retract her allegations. "I said what I said and I'm living in my TRUTH," she insisted, "ain't nobody gonna bully me to take no post down that's the TRUTH! I ain't never have to lie about a damn thing!!!" 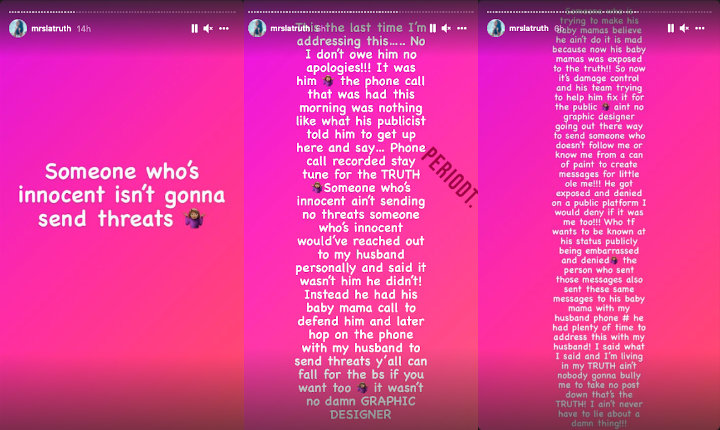 Mrs. LaTruth previously shared screenshots of DM in which DaBaby allegedly asked another woman to help him connect with Mrs. LaTruth, who is already married. Denying that he sent the DM, the "Suge" hitmaker later responded in an Instagram video, "Whichever one of you graphic designer n***as took my name and that blue check and created that fake ass motherfckin' DM making it look like I'm out here tryin' to slide in some wife DM, you dead f**kin' wrong."

The Grammy Award-nominated artist further pointed out that he didn't speak like the person in the DM. "Dead wrong n***a. And I don't even talk like that," so he claimed. "Pick up on my lingo a little better next time and maybe it will make some bigger blog sites... Make it sound a little bit more like me."

DaBaby Fuming After Accused of Trying to Woo a Married Woman