The 'Keeping Up with the Kardashians' alum admits she is 'not ok' after her second child and first son with estranged husband Kanye West suffers the injuries.

AceShowbiz - Kim Kardashian hurts for her son Saint after the boy injured himself in an accident. The reality TV star has just taken to social media to reveal that her second child with Kanye West "broke his arm in a few places" on Thursday, September 9.

Making use of her Instagram Stories, the 40-year-old shared two pictures of her son after the incident that left him wearing a cast. In one of the images, Saint sat in a wheelchair as his arm rested on what looks like a white pillow.

In the caption, Kim wrote, "Who do you think cried more today? My baby broke his arm in a few places today." For that reason, the SKIMS founder admitted, "I'm not ok."

The second image, meanwhile, captured a close-up look at the five-year-old's arm in a cast that goes above his elbow. Pitying the boy, the mom captioned the snap, "Poor baby" with a sad face emoji. 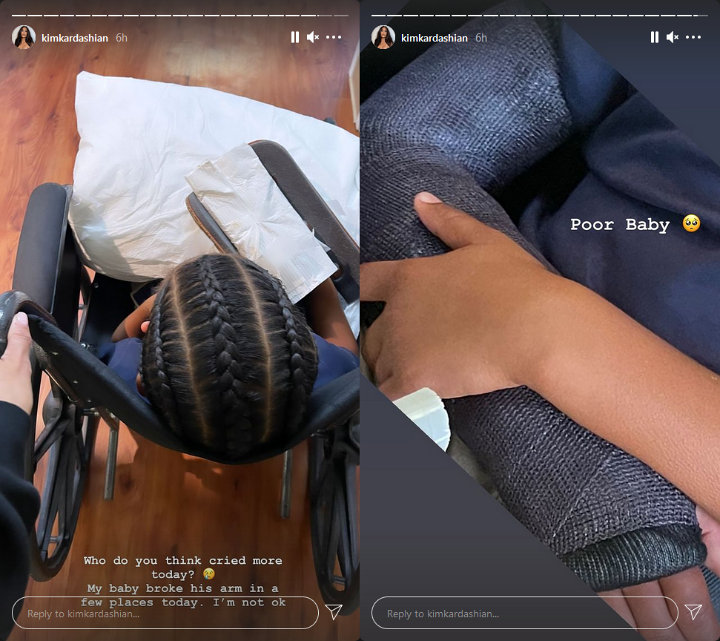 Kim, however, has not divulged how Saint suffered the injuries. Just several hours prior, the estranged wife of Kanye posted a picture of the boy smiling while posing next his best friend Koehen, who celebrated his birthday on Thursday. "Happy Birthday Koehen!! Thank you for being Saint's best friend. We love you," so she captioned the pic that showed the two happy boys.

This isn't the first time Saint has faced a serious health issue in the last few months. In a May episode of "Keeping Up with the Kardashians", the reality TV star revealed that her son tested positive for COVID-19.

"Sainty just tested positive for COVID," Kim told an unnamed person on the phone in a clip of the said outing. Looking rather downcast and worn out, she hinted that her eldest child North West might also have the virus. "And North is saying she's feeling sick," she added.

The mother of four admitted in a confessional, "I'm trying not to freak anyone out, but I'm just really worried." Kim and the rest of her kids later also tested positive for the virus, but they have since recovered.