It is assumed that the post is in response to Ye removing Breezy's verse from track 'New Again' that doesn't make the final cut of Kanye's long-awaited album 'Donda', which was released on Sunday.

AceShowbiz - Chris Brown raised people's eyebrows after he slammed his collaborator Kanye West in a now-deleted tweet. A fan caught the R&B star calling Kanye a "whole h*e" on his Instagram Story post before actually removing it.

A screenshot of the post, which was shared by Saycheese TV on Twitter, read, "Kanye a whole h*e." He doubled down his message with a follow-up post that read, "Nah he tweakin." 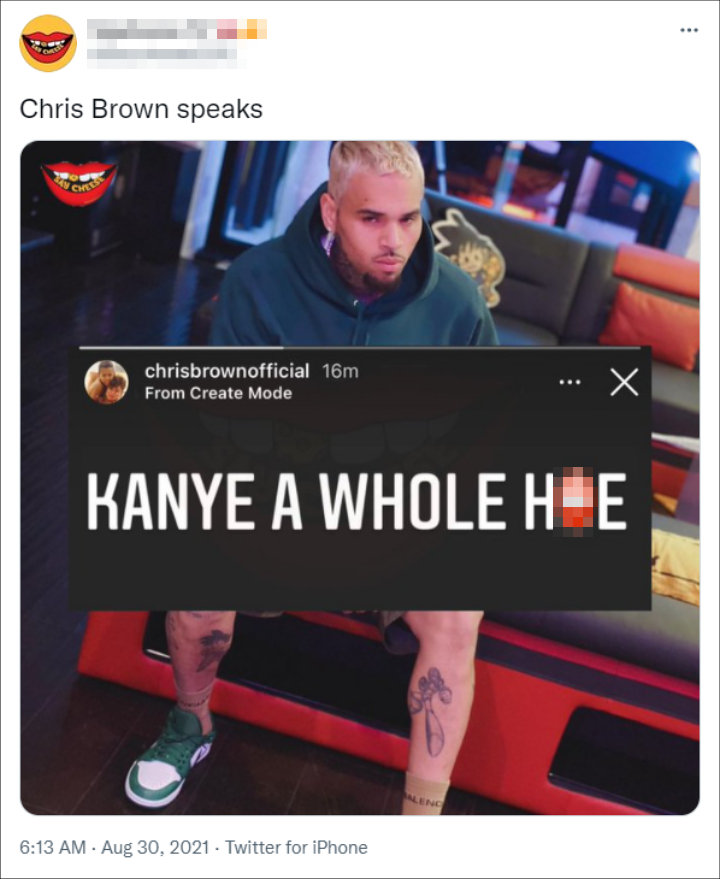 It is assumed that the post was in response to Kanye removing his verse from track "New Again" that didn't make the final cut of Kanye's long-awaited album "Donda". The trackwas initially listed as track 18 of the 27 song album which Ye said was without his approval. The Shade Room also reported a source close to the situation revealed that the "No Guidance" singer was "a little heated about the verse being removed" from the song.

Breezy wasn't the only one who was upset with Yeezy during the "Donda" rollout. Rapper Soulja Boy dragged the "Gold Digger" spitter took to his Twitter account on Sunday to blast Ye as "weird af." He shared some screenshots of their alleged text exchanges in which Soulja sent a verse to Ye.

In a separate post, Soulja slammed Ye for leaving him off Young Thug-featuring "Remote Control". He tweeted to fan, "Idk how to feel, Kanye sent me that song 'remote control' and I don't hear my verse on it," adding, "hmm f**k that n***a."

"Donda" was available on the Apple Music and Spotify platforms early on Sunday morning, but Kanye claimed that it was not on his approval. Slamming his label, the rapper tweeted, "Universal put my album out without my approval and they blocked 'Jail 2' from being on the album," referring to his and DaBaby's collaborative track which was supposed to be featured on "Donda".