The 'Voice' artist's Instagram post arrives after 7-year-old Serenity Broughton and her 6-year-old sister Aubrey were shot in a recent gun incident that killed Serenity's life.

AceShowbiz - With so many people becoming victims of gun violence, Lil Durk thinks that it's time to make changes. Taking to his social media account, the "Laugh Now Cry Later" spitter called for an end to gun violence after two young girls being shot in his hometown.

On Tuesday, August 17, the rapper shared a screenshot about Broughton sisters who were victims in a shooting incident earlier this month. "I be willing to help the best way I can but some higher power act as if they don't care," Durk wrote over the image. "This need to change and ASAP." 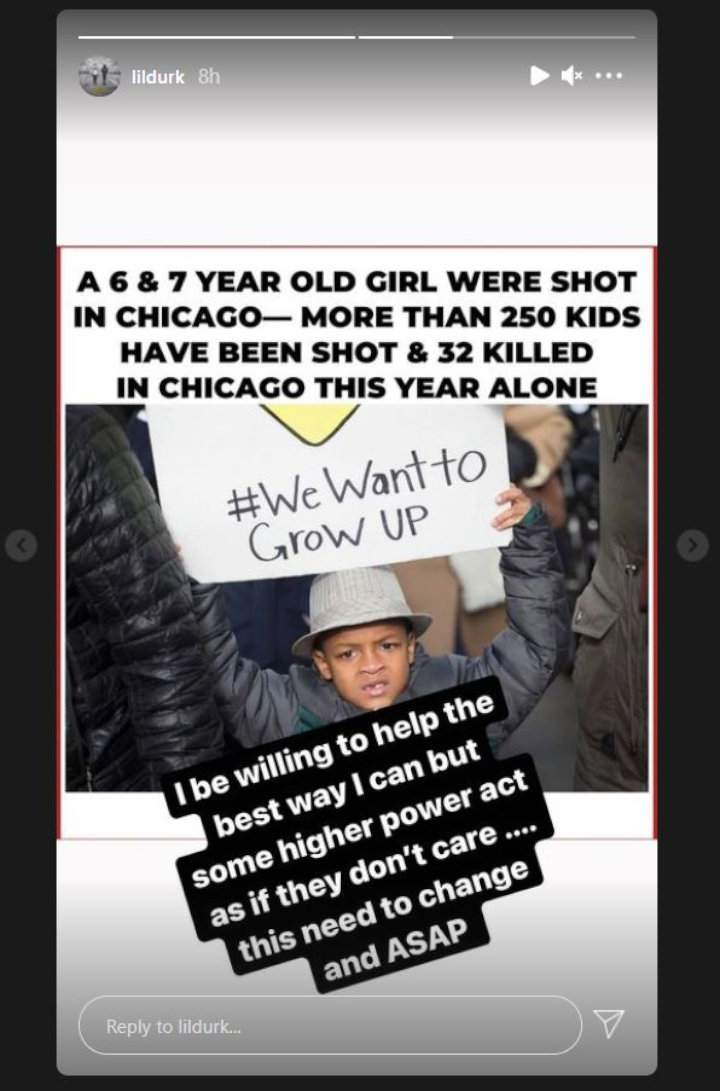 Lil Durk called for a change in Chicago.
See also...

Durk's post arrived after 7-year-old Serenity Broughton lost her life to gun violence after being shot in the chest. Meanwhile, her 6-year-old sister Aubrey has since been stabilized after being rushed to Loyola University Medical Center. The two reportedly were shot on Sunday when they were with their family after enjoying a morning at church. It was said that the girls were inside the family's vehicle when someone drove by and opened fire.

"Aubrey, the bullet ruptured her lung and she had to be intubated," the girls' grandmother Regina Broughton said, adding, "Serenity's injury was fatal. The bullet pierced her heart -- she didn’t have a chance." A neighbor went on to share, "Like a machine gun going off, like, you know what I mean, like two people shooting at each other or something."

The little girls father denied involvement in any gangs, saying in a statement, "I'm not no gangbanger. I'm not out here doing the wrong thing. I'm a CTA worker. I'm a bus driver."

Of Aubrey's condition, meanwhile, Regina told reporters, "She's in a lot of pain. They're keeping her mildly sedated." She continued, "I did hear her speak, which was reassuring, except she was crying out that it hurt."