During his appearance on the 'Happy. Sad. Confused.' podcast, the 'Guardians of the Galaxy' director is asked to address the Hollywood legend's comments on MCU movies back in 2019.

AceShowbiz - James Gunn has weighed in on fellow director Martin Scorsese's criticism towards Marvel movies. During his appearance on the "Happy. Sad. Confused." podcast, the "Guardians of the Galaxy" director is asked to comment on Martin's comments back in 2019.

"I just think it seems awful cynical that he would keep coming out against Marvel and then that is the only thing that would get him press for his movie," James said as reported by The Playlist. "He's creating his movie in the shadow of the Marvel films, and so he uses that to get attention for something he wasn't getting as much attention as he wanted for it."

James also said that he has had plenty of encounters where he approached film directors ro ask them to elevate the blockbuster. However, these directors "cater to every single studio whim" and it grossed him out.

James further shared his thoughts on Martin a tweet on Wednesday, August 5. Of the Hollywood legend, James said, "Also for the record, Martin Scorsese is probably the world's greatest living American filmmaker. I love & study his films & will continue to love & study his films. I disagree with him solely on one point: That films based on comic books are innately not cinema, that's all." 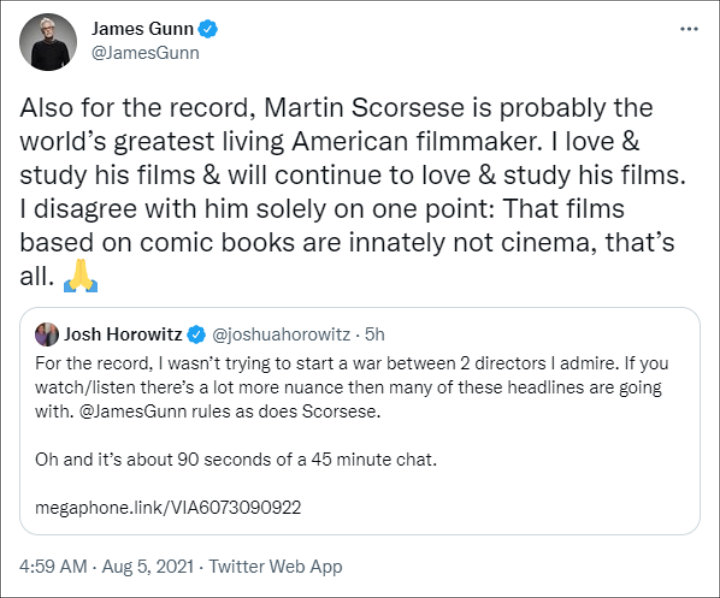 Back in November 2019, Martin sparked debate when he said that he didn't consider MCU movies a cinema. When asked if he ever watch any of them, the "The Wolf of Wall Street" director replied, "I tried, you know? But that's not cinema. Honestly, the closest I can think of them, as well made as they are, with actors doing the best they can under the circumstances, is theme parks. It isn't the cinema of human beings trying to convey emotional, psychological experiences to another human being."

Some Marvel stars reacted to the remarks as Scarlett Johansson said, "At first I thought that seems kind of old-fashioned, and somebody had to explain to me, because it seemed so disappointing and sad in a way. They said, 'I think what these people are saying is that at the actual theater, there's not a lot of room for different kinds of movies, or smaller movies, because the theater is taken up by huge blockbusters.' "

As for Chris Evans, he commented, "I think original content inspires creative content. I think new stuff is what keeps the creative wheel rolling. I just believe there's room at the table for all of it. It's like saying a certain type of music isn’t music. Who are you to say that?"

Mark Hoppus on His Fifth Round of Chemotherapy for Stage 4 Lymphoma Cancer: 'Let's Heckin Go'