After devotees complained about the design and cost of the products, the 'Juicy' hitmaker issues an apology, but notes that she has no idea who had designed them.

AceShowbiz - Doja Cat has apologized to fans on social media after they complained about the rap star's "Planet Her" merchandise line.

The rap star, real name Amala Ratna Zandile Dlamini, took to Twitter over the weekend (July 23 to 25) to address the recent backlash after devotees complained about the design and cost of the products.

"the merch [merchandise] is bad. i'm aware. don't worry [sic]," she tweeted in response to the complaints.

She doesn't seem to have been directly involved with the branded clothing items, as she responded, "i don't know [sic]," when a fan asked her who had designed them.

She distanced herself from the merchandise.
See also...

The "Juicy" hitmaker promised she will resolve the issue and insisted she "understood" if shoppers objected to paying $35 (£25) for one of her hats. 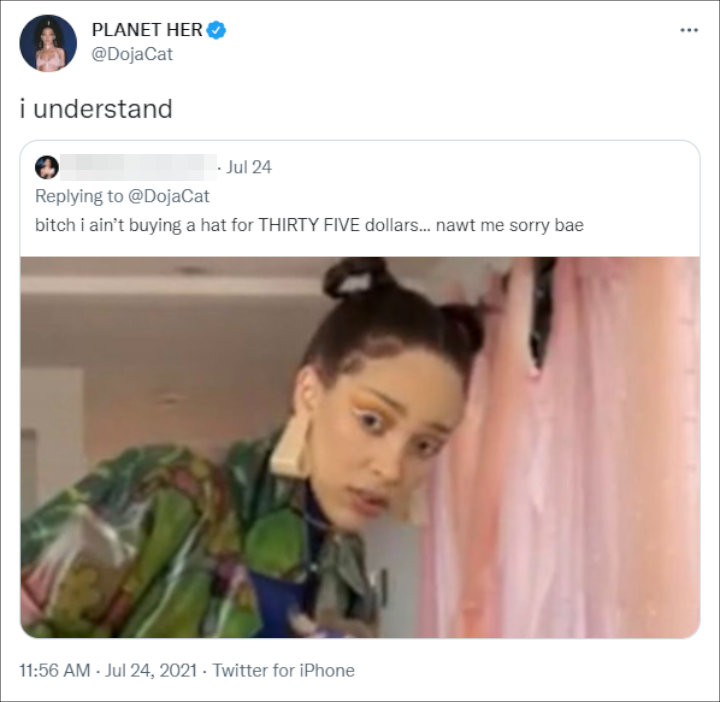 She claims she understood the backlash.

"Planet Her" - the name of her third studio album - is branded on hoodies, T-shirts, sweatpants, shorts, and hats are currently for sale on the rapper's own official site, shop.dojacat.com.

Just days earlier, Doja shared her views on the cancel culture. In an interview with Nick Cannon on his Power 106 show, she said, "There is times where people will understand you're apologetic - or they don't have to accept your apology at all, which is completely fair."

The "Say So" hitmaker continued, "But it's how you handle it and I think that if you are combative against people who are continuously trying to tear you down, it doesn't benefit you or the other people."

Robyn Dixon's Beau Juan Is 'Tired' of Her Making 'Excuses'