While the troll seems to be bothered by the way he reveals his wife's first pregnancy, many of his fans send him congratulatory messages for the exciting news.

AceShowbiz - Jacob Roloff is not letting anyone dictate his social media content. Having found his baby announcement got criticized by an online troll, the "Little People, Big World" alum was quick to defend himself.

On Tuesday, July 20, the 24-year-old revealed on Instagram that his wife Isabel Sofia Rock is pregnant with their first child together. Sharing some pictures of the two, he declared, "Not for you but us: I'm very happy to say we're having a son."

While many of Jacob's fans sent him some congratulatory messages, one person in particular seemed to be displeased with how he wrote the caption. The individual argued, "What's up with this dude. Not for you but us?. It's like he hates everyone on sm or trying to get attention, be normal."

After noticing the comment, the TV personality set aside time to offer his clapback. He urged, "Look at you @ name lmao. Look at yourself after that; then your comment; then my caption again. Back and forth until it makes sense." 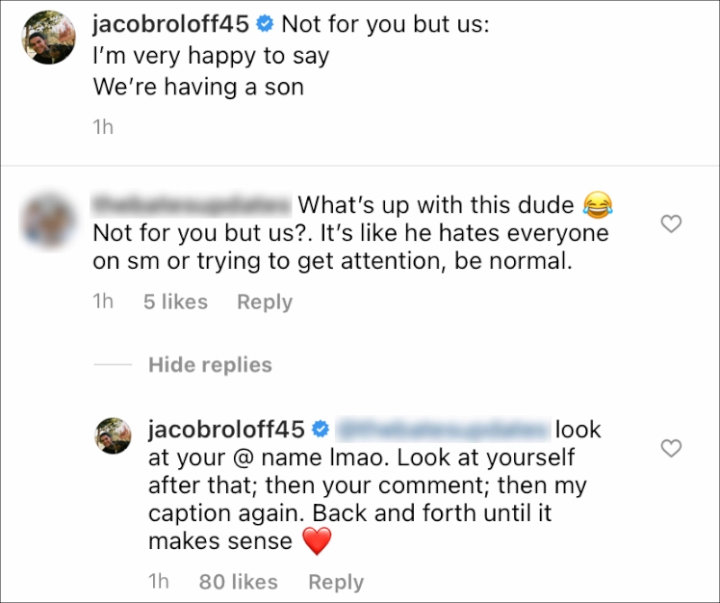 Jacob Roloff fired back at a troll criticizing his baby announcement.

Critic aside, Jacob's wife Isabel also shared the baby news on her own Instagram page. Posting similar photos, she noted, "We are elated to share that the baby boy we have been dreaming of is coming this December."

Jacob and Isabel were first linked romantically in 2014. The twosome then got engaged in December 2017 while taking a romantic trip to Iceland. They tied the knot later in September 2019.

In March, Isabel got candid about when she would feel was the right time to expand their family. "I asked my friend a few days ago when she knew she was ready to have kids. She said, 'We didn't. We were waiting for this 'aha' moment and it never happened.' That stunned me," she explained on Instagram.

"Because my entire life has been made up of waiting for these aha moments and they just don't happen. You never feel really ready for anything," the now-expectant mom added. "But eventually, you find the courage and take the leap. And you just do the damn thing."

Apryl Jones Misses Her 'Baby' as Dr. Dre Is Spotted With Mystery Woman