The 'Just a Friend and Vapors' hitmaker, who had battled diabetes for the past decade, passed away on Friday evening, July 16 at the age of 57, prompting many to pay tribute via social media.

AceShowbiz - Hip-hop stars Q-Tip and Questlove are among those mourning the loss of rap pioneer Biz Markie.

The "Just a Friend and Vapors" hitmaker, who had battled diabetes for the past decade, passed away on Friday evening, July 16, aged 57.

The news hit his rap peers and fans hard, and Q-Tip was among the first to pay tribute on social media.

Taking to Twitter, the A Tribe Called Quest star wrote, "This one hurts baad ... RIP to my Aries bro... ahhh man @BizMarkie d**n im gonna miss u so so many memories.. hurts bad. My FRIEND [sic]."

The Roots star Questlove shared a photo of the two old pals on Instagram, and revealed how much of an influence Markie had had on him early on in his career, helping to foster his love of collecting vinyl records.

Questlove went on to call Markie "one in a million," adding, "He taught me ALOT. Im using ALL the education he taught me. We will miss [him]. But he will be here forever. Love you Biz @officialbizmarkie #BizMarkie [sic]."

Rapper Immortal Technique and actress Holly Robinson Peete were also among those to offer up early tweets in his memory, as was funk icon Bootsy Collins. 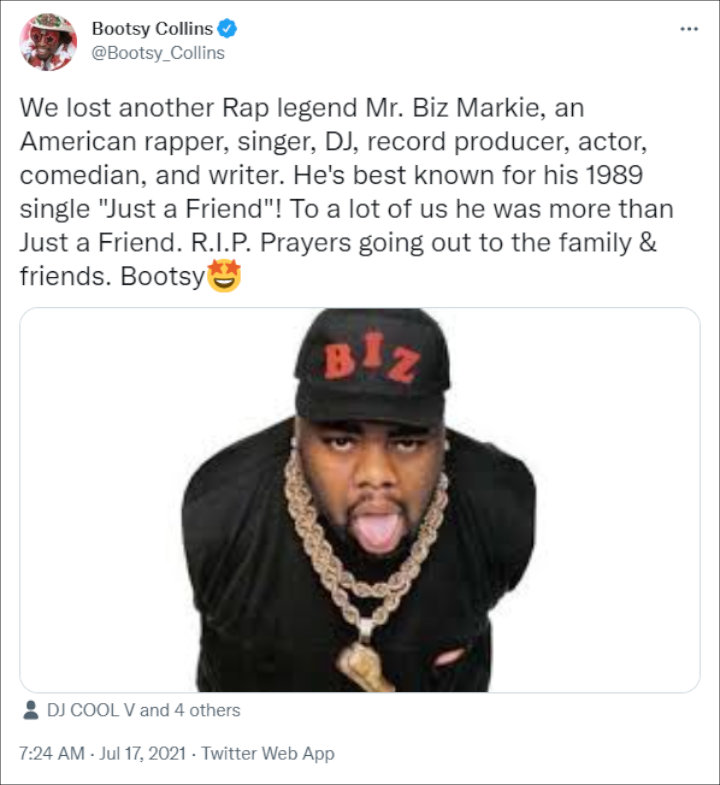 "We lost another Rap legend," he tweeted. "Mr. Biz Markie, an American rapper, singer, DJ, record producer, actor, comedian, and writer. He's best known for his 1989 single Just a Friend! To a lot of us he was more than Just a Friend. R.I.P. Prayers going out to the family & friends [sic]."

DaniLeigh Announces Pregnancy With DaBaby Speculated to Be the Father