The 'I Like It' hitmaker, who is expecting her second child with her rapper husband Offset, assures her fans that she will be making a huge chart comeback after giving birth.

AceShowbiz - Rapper Cardi B is determined to prove her critics wrong by bouncing back from her second pregnancy and making a huge chart comeback.

The "I Like It" hitmaker recently revealed she's expecting her second child with her Migos star husband Offset, but that hasn't changed her attitude towards her career.

Instead, Cardi has fired back at veteran rapper Joe Budden, who suggested she won't be making another album once she's got her hands full with two kids.

Responding to the comments on Twitter, the fiery star insisted she will be back in the studio in no time, while also indicating her desire to potentially obtain a college degree.

She wrote, "Well he deada** wrong... watch when I push out this baby wait 6 months go to Colombia get a lipo, breast reduction, learn how to pole dance again , learn how to play spade and get my political science degree and pop out with my album ...Yeup Yeup he going to [be] wrong muahaha [sic]." 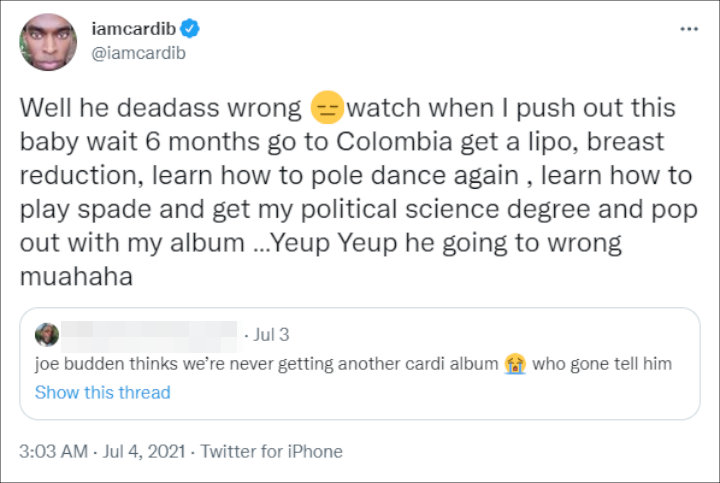 Cardi B insisted she'll bounce back after second child.

Cardi previously underwent plastic surgery to help her regain her figure following the birth of the couple's daughter Kulture, who turns three this month (July 2021). She released her debut album, "Invasion of Privacy", in 2018.

Budden himself made the prophesy in an episode of "The Joe Budden Podcast". At the time, he stated, "Let me tell you, y'all are never getting a Cardi album again. Let me tell y'all something. Cardi was broke, not real broke but her broke when that first album came and Offset was there."