The former 'Good Morning Britain' presenter claims that he has some parenting tips to share when he criticizes the 'Gone Girl' actress' baby-holding technique.

AceShowbiz - Emily Ratajkowski has received many fierce criticisms and comments, one of which was from Piers Morgan, for the way she holds her son Sylvester Apollo Bear. After her photo went viral on the internet, the "Gone Girl" beauty has gotten called out publicly by the outspoken journalist for her baby-holding technique.

"That's not how you hold a baby @emrata," the father of four insisted in a tweet he posted on Monday, June 7. Alongside the image of the 30-year-old model holding her 3-month-old son Sylvester with one arm, the 56-year-old continued, "And your millions of followers shouldn't be encouraged to do the same. Happy to give you some tips if you need them."

Emily, who has 26.7 million followers on Instagram, shared a series of photos with her son Sylvester a day before her 30th birthday with the caption that read, "Bday eve with the dream vacation partner." In the photo, she donned a matching orange patterned swimwear with her baby boy. The first two photos showed her holding her son with one arm, but the following snaps featured her holding and hugging him with both arms.

The former "Good Morning Britain" presenter's comment has since been flooded with mixed reactions. Some people agreed with his criticism, while others defended Emily. Echoing the TV personality's remark, a Twitter user suggested that the "We Are Your Friends" actress "gets advice from a qualified midwife on holding any baby," adding, "She will find that even in this day and age supporting the baby's head is essential to the health and safety of any young baby."

In the meantime, other users pushed back against Piers' remarks. One person said, "What a world we live in. Moving onto parent shaming now? Why do we have such an obsession on 'how bad' other people are doing with their lives. Here's a novel idea… How about we focus on our own?"

Nicola Keaney, the deputy head of trends on Twitter, commented on Piers' statement, writing, "Imagine mansplaining to a new mother how she should hold the child that came out of her. He's tagged her to get a reaction to amplify his ailing profile. Not long now till he's doing 118 adverts…" The "Piers Morgan's Life Stories" star then responded, "If she chooses to use her baby as a prop to promote [herself] to 27 million people on Instagram, and she's holding that baby in a dangerous way, it's actually the duty of any caring human being to tell her so the baby comes to no harm." 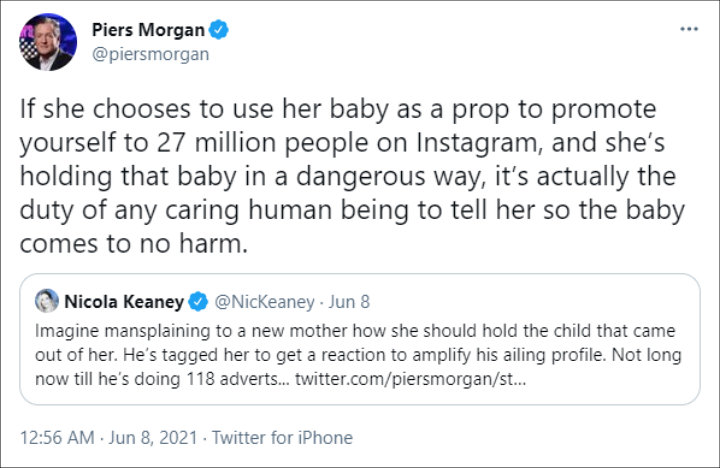 Emily welcomed her son with her husband Sebastian Bear-McClard on March 8 this year. At the time, she announced the exciting news on her Instagram page, writing, "Sylvester Apollo Bear has joined us earth side. Sly arrived 3/8/21 on the most surreal, beautiful, and love-filled morning of my life."