The musician, who died at his home in Sheffield, Alabama, was a member of the Swampers and had played on many R'n'B hits, including 'Respect', 'Mustang Sally' and 'When a Man Loves a Woman'.

AceShowbiz - Drummer Roger Hawkins, who played on R&B hits "Respect", "Mustang Sally" and "When a Man Loves a Woman", has died, aged 75.

The revered session musician was a member of the legendary Swampers and Muscle Shoals Rhythm Section, who performed on a string of hits recorded by the likes of Aretha Franklin and Wilson Pickett.

Hawkins died on Thursday, May 20 at his home in Sheffield, Alabama, according to RollingStone.com.

Hawkins became the founding drummer in the Swampers when FAME Studios owner Rick Hall was looking to recruit local Alabama musicians to serve as his house band. He joined Jimmy Johnson, bassist David Hood and keyboard player Barry Beckett as Hall's session musicians at Muscle Shoals, where Pickett and Franklin recorded a number of soul classics in the mid-1960s.

The drummer and his bandmates left FAME in 1969 and launched their own studio, where they recorded with Cher, The Staple Singers, Paul Simon and Rod Stewart, among others.

Hawkins is considered one of the greatest drummers of all time by many music experts and made the Rolling Stone Top 100. He was inducted into the Alabama Music Hall of Fame in 1995 and the Musicians Hall of Fame in 2008.

Paying tribute to one of his music heroes, Jason Isbell writes, "The music we love wouldn't sound the same if he'd never shared his gift with all of us." 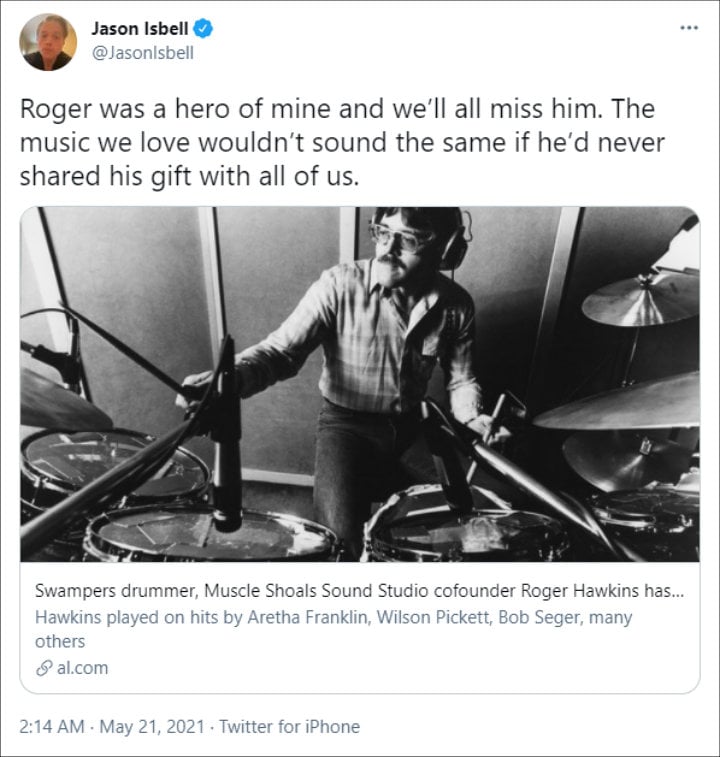 Also mourning the loss of Hawkins was the Muscle Shoals Music Foundation. In its Facebook page, the nonprofit remembered him as "a kind and generous man who loved family, friends and his fellow musicians." It continued, "We love you Roger. Rest in Peace and watch over us as we are all better for having known you. We will think of you as we listen to your many hits..."