As the 'Keeping Up with the Kardashians' star and the Blink-182 drummer are getting more smitten, her family thinks that marriage is 'almost certain' between the two.

AceShowbiz - Younes Bendjima has nothing against Kourtney Kardashian and Travis Barker. Having been accused of shading his ex-girlfriend and the Blink-182 drummer over their racy picture, the model was quick to shut down the rumors and urged, "let's move on."

The 27-year-old hunk set the record straight via Instagram Story on Thursday, April 27. "I always post quotes since years, all types of quotes. Stop attaching myself to people that are not part of my life anymore, its been two years let's move on," he wrote. "No need for bad vibes. Keep me far way from all that. Much appreciated. Gracias amigos." 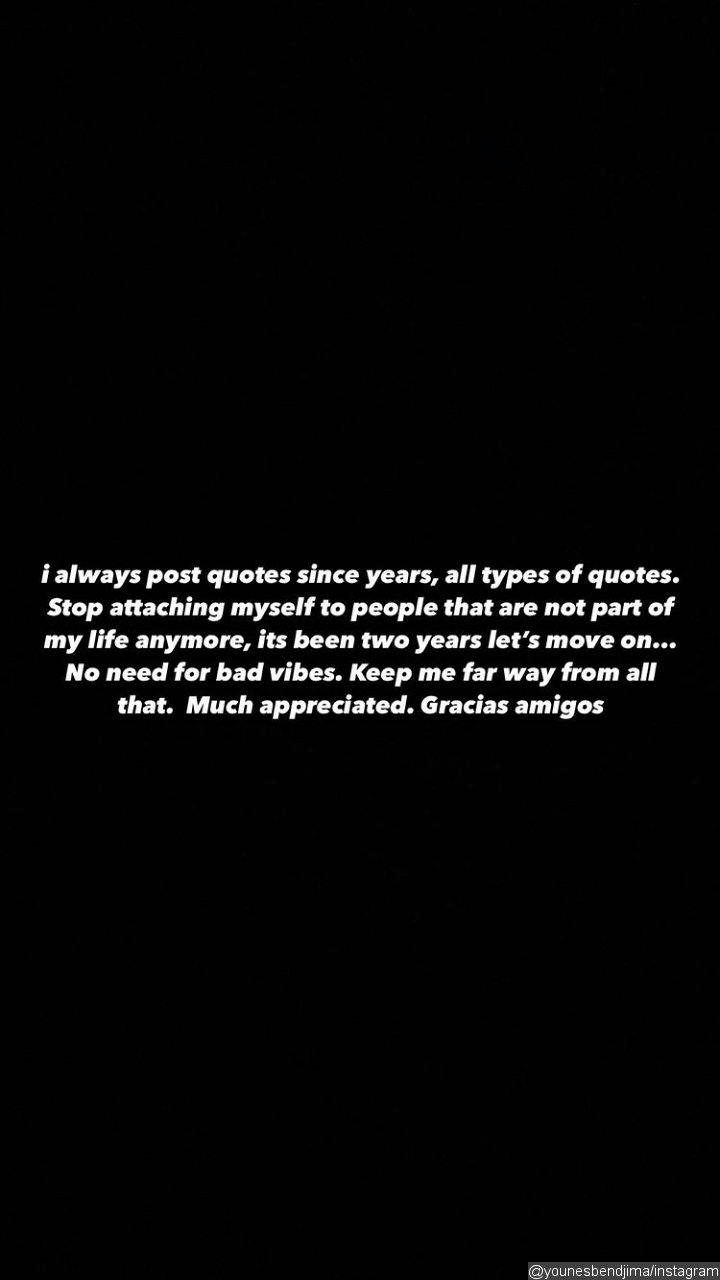 Younes Bendjima clarified he did not diss Kourtney Kardashian and Travis Barker.

One day earlier, Younes put out a cryptic quote on Instagram Story that read, "Shamelessness has become so normal in today's society that modesty has become strange." Although he did not mention any name, the post came shortly after Kourtney unleashed a steamy photo with Travis.

The snap in question was uploaded on Instagram by the "Keeping Up with the Kardashians" star. It saw her rocking a thong bikini while passionately kissing her musician beau in the desert. She gushed in the caption, "Just Like Heaven."

Since confirming their romance in mid-February, Kourtney and Travis did not shy away from showing PDA on several occasions. A source told Life & Style that her family even thinks marriage is "almost certain" between the two.

"Her sisters say they've never seen Kourtney this crazy in love," the source went on. "[Kris Jenner] is ecstatic that her oldest daughter is this happy … It's an exciting time for Kourtney, and no one deserves it more than her."

"Kourtney and Travis are doing absolutely nothing to squelch the rumors that they'll be getting married. In fact, it seems that all their actions are pointing in that direction," the insider concluded. "It's no secret that they're in love and enjoying a red-hot, sexually-charged romance."

Katie Thurston Ends Her 'Bachelorette' Season Filming 'Ahead of Schedule'

Younes Bendjima Pays Sweet Tribute to Ex Kourtney Kardashian: 'It's All Love at the End of the Day'