The former 'Gossip Girl' star claps back after her actor husband jokes it might be time for their 1-year-old daughter Betty to watch her mother's thriller film 'The Shallows'.

AceShowbiz - Blake Lively and her husband Ryan Reynolds kept up their tradition of trolling each other on social media. After the "Deadpool" leading man spilled his hilarious idea to end their daughter Betty's obsession for "Baby Shark" song, the "Gossip Girl" alum set aside time to give her perfect response.

On Sunday, April 25, the 44-year-old actor first shared on Instagram some pictures of his wife from "The Shallows", a 2016 thriller movie about a surfer who gets attacked by a great white shark. Alongside the snaps, he jokingly wrote, "My one year old daughter is obsessed with Baby Shark. All day. Every day. There's only one way to fix this."

Hours afterwards, Ryan's wife confidently replied in the comment section, "She's gonna love Savages." Not stopping there, the mother of three uploaded a screenshot of her husband's post, adding in the caption, "...Well at least they'll have ample content for therapy." 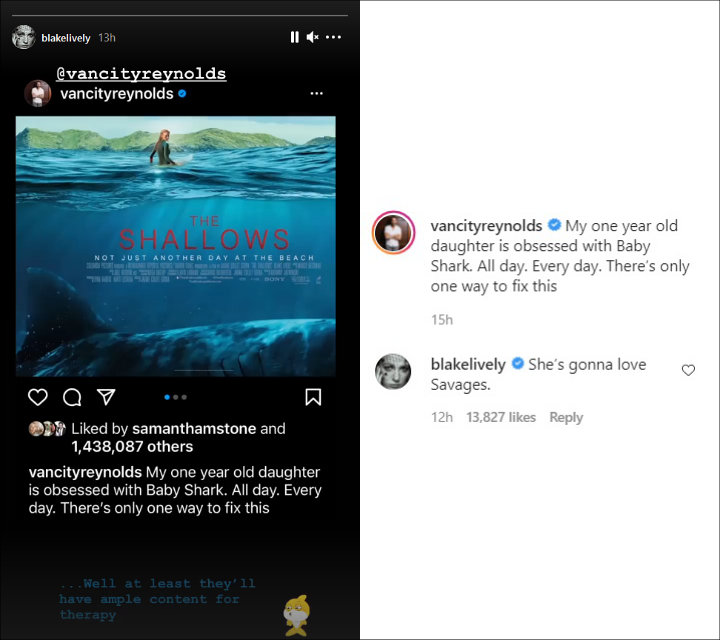 Blake Lively clapped back at Ryan Reynolds over his recent troll.

This was not the first time Ryan poked fun at Blake. In late March, he put out a photo of himself wearing a pink beanie during a COVID-19 vaccination. He put it next to an image of his spouse from her 2020 film "The Rhythm Section" where she sported a blue beanie. He then compared their looks by creating a poll between the two and asking his followers, "Who wore it better?"

Around two weeks prior to that, Blake playfully called out Ryan for not inviting her to the set of "Deadpool 2" when Brad Pitt filmed a cameo. In a clip shared on Cinephile Club Instagram account, which saw Brad shooting his scene, she penned in the comment section, "Weird... My husband didn't invite me to set that day."

Blake and Ryan tied the knot in 2012. In addition to Betty, they also share two other daughters, 6-year-old James and 4-year-old Inez.