Joining the Twisted Sister frontman to call out the conservative rocker are fellow musicians Sebastian Bach, who says he has no sympathy for Asian hate, and Danko Jones, who blasts Ted as 'a gigantic village idiot.'

AceShowbiz - Dee Snider has no sympathy for Ted Nugent who has tested positive for COVID-19 after playing down the virus. After the conservative rocker opened up about his illness, the former took to Twitter to blast the pro-gun political activist, suggesting that Ted's COVID diagnosis is "karma."

"I have zero sympathy for loud mouth naysayers who get the thing they've been naysaying! People have suffered & died while Ted literally called Covid bulls**t," he tweeted on Tuesday, April 20, adding the hashtag "#karmasab***h."

Echoing Dee's sentiment, Canadian musician Sebastian Bach retweeted the Twisted Sister lead singer's post and wrote, "Zero sympathy for Asian hate. You want to dish out hate you're going to get hate right back no problem. Zero sympathy for anyone I meet that uses the N word." He added, "For every musician like this there is a guy like me or Dee who is not going to take it. Plus we are bigger than them." 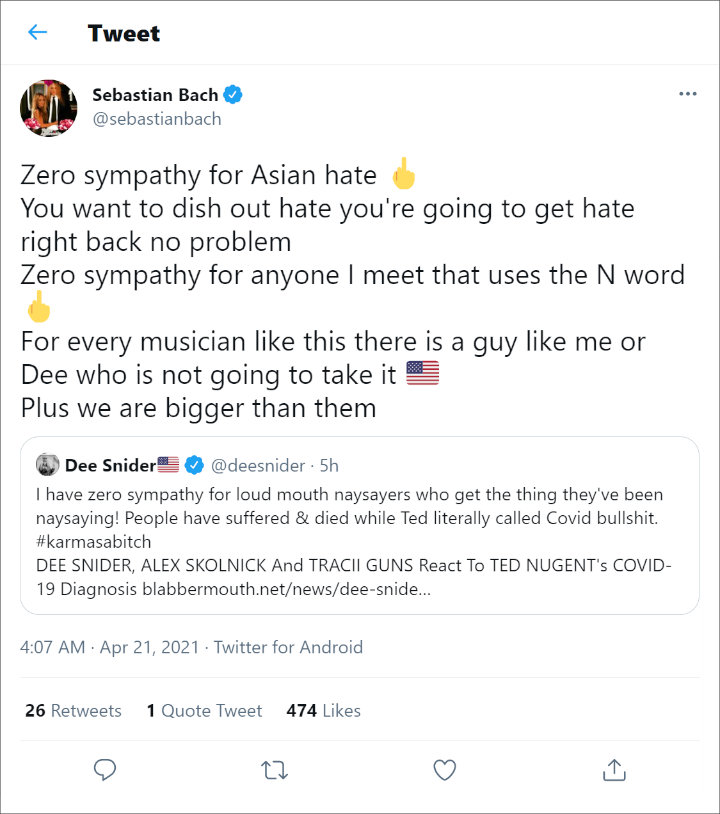 Sebastian also appeared to throw shade at Ted when he called out people who blame China for catching the virus. "If you're dumb enough to believe that masks and vaccines don't work, don't blame your Covid on China. Blame it on the fact that you're a sad old white racist who is too ignorant to know even the basic instincts of survival," he wrote in a separate tweet while urging people to "Get the Shot." 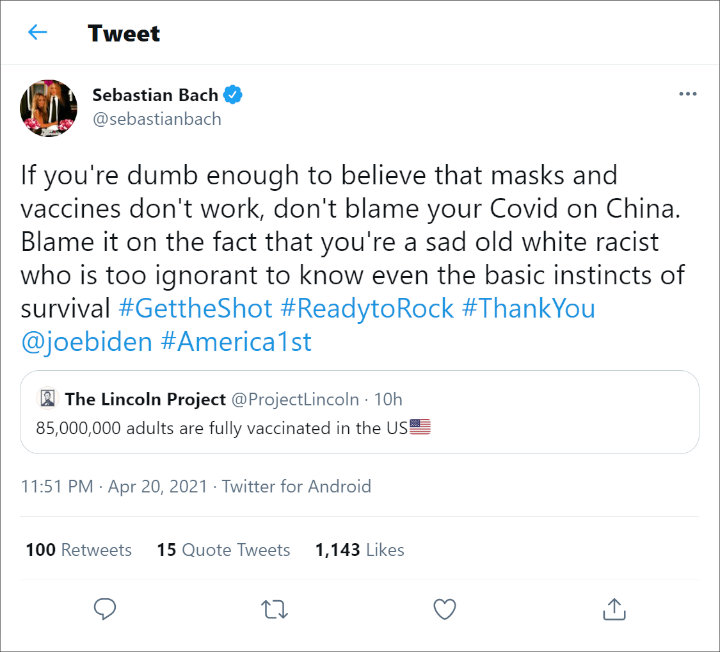 Alex Skolnick mocked the ailing star by posting a screenshot of an article about Ted speaking out against the vaccine and another article about his COVID-19 diagnosis. "How it started... How it's going," he captioned it.

Dee reposted it and wrote in the caption, "It's just...so...beautiful!" Danko Jones also reacted to Alex's tweet, writing, "I've said it many times and I'll say it again, @TedNugent is a gigantic village idiot." 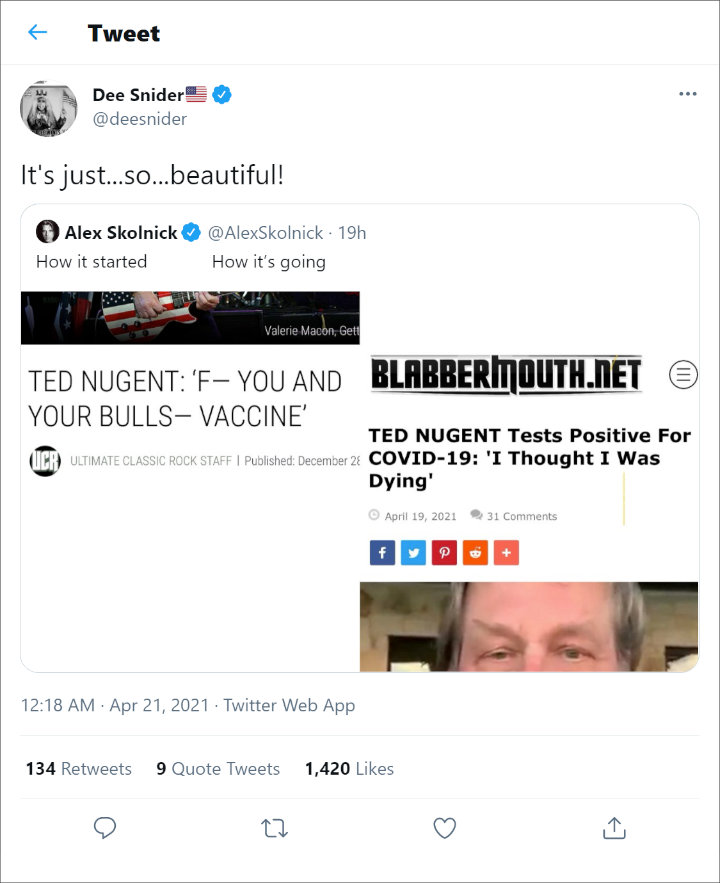 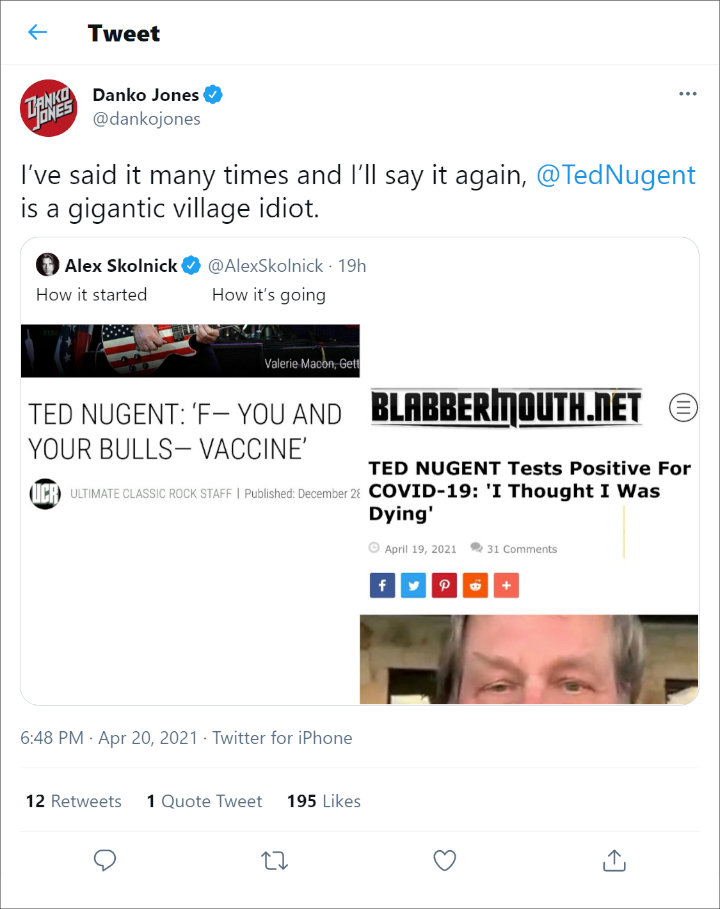 Traci simply captioned Alex's post with a man facepalming emoji and expressed his opinion in his own words in another tweet. "Just to be clear I'm bummed Ted got sick I'm equally as bummed he didn't have enough foresight to trust science," he stressed. "Is being loud, confident and wrong worth dying for?" 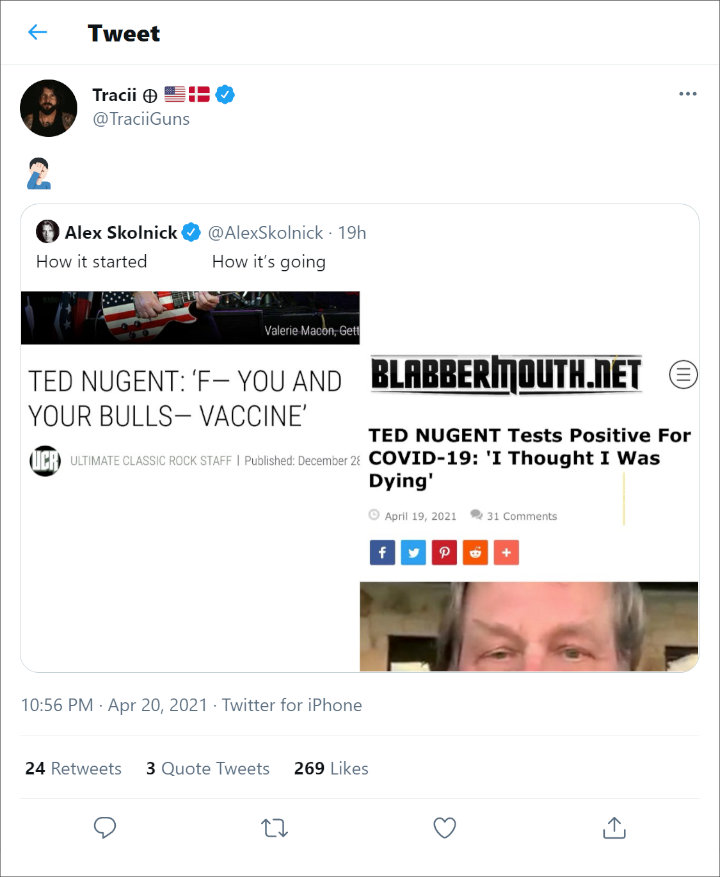 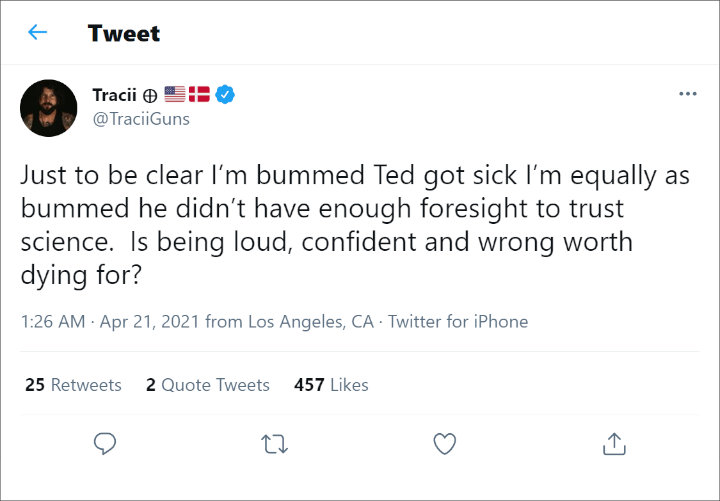 Ted went public with his diagnosis in a Facebook Live video on Monday shortly after testing positive. The fervent supporter of former U.S. President Donald Trump confessed he was so ill and he feared the worst, while spouting the racist rhetoric promoted by the former president, referring to the coronavirus as the "Chinese virus attack."

"I have had flu symptoms for the last ten days. I thought I was dying. Just a clusterf**k," the 72-year-old said. "I was tested positive today. I got the Chinese s**t. I've got a stuffed up head, body aches. My God, what a pain in the a**. I literally could hardly crawl out of bed the last few days... So I was officially tested positive for COVID-19 today."

Despite falling ill with the disease, Ted repeated his recent vow not to get the COVID-19 vaccine, falsely claiming, "Nobody knows what's in it."