The 'Laugh Now Cry Later' spitter, whose recent concert ended abruptly after supposed gunfire was heard, takes to social media to speak up about the incident.

AceShowbiz - One of Lil Durk's fans could not hide her disappointment after being injured at his recent concert. Tahjee Gray, who suffered a bloody leg injury during an abrupt end of Smurkchella, blamed Phoenix's Celebrity Theatre for lack of "safety measures."

"My anger isn't toward Durk. My issue is with the establishment and putting thousands of people at risk," the 23-year-old New Jersey native told The Shade Room. "My injury is the least of my concerns. My concern is that there were no safety measures at all... [They] weren't taken at all... There was no order."

Gray said that she and her best friend went to Phoenix instead of Miami with hopes that it would be a safer choice. However, upon her arrival, she alleged that the lines at the entrance were already chaotic and securities did not even check attendees' bags nor scan their tickets. "That was my first red flag," she pointed out.

Gray recalled that the Saturday, April 17 concert was great until the people heard loud noises during the last performance. It prompted her and more than 10,000 people to panic and run in different directions. She noted that she fell a few times while trying to leave the theatre and noticed her leg was bleeding due to a large gash.

Although police assumed that her cut was a graze from a bullet, Gray was not sure what the source of her cut was. She then got treated at a nearby hospital and received seven stitches on it. "It was a lot going on. We didn't stay around to see what was happening," she stated, adding that she is considering taking legal action against the venue.

Contrary to Gray's statement, Smurkchella insisted there was no woman being grazed by a bullet and stressed that no one needed paramedic attention. The show's organizers also claimed to TMZ that it was just a microphone dropping on the ground that made a loud noise many believed to be gunshots.

Lil Durk responded to reports of gunshots at Smurkchella. 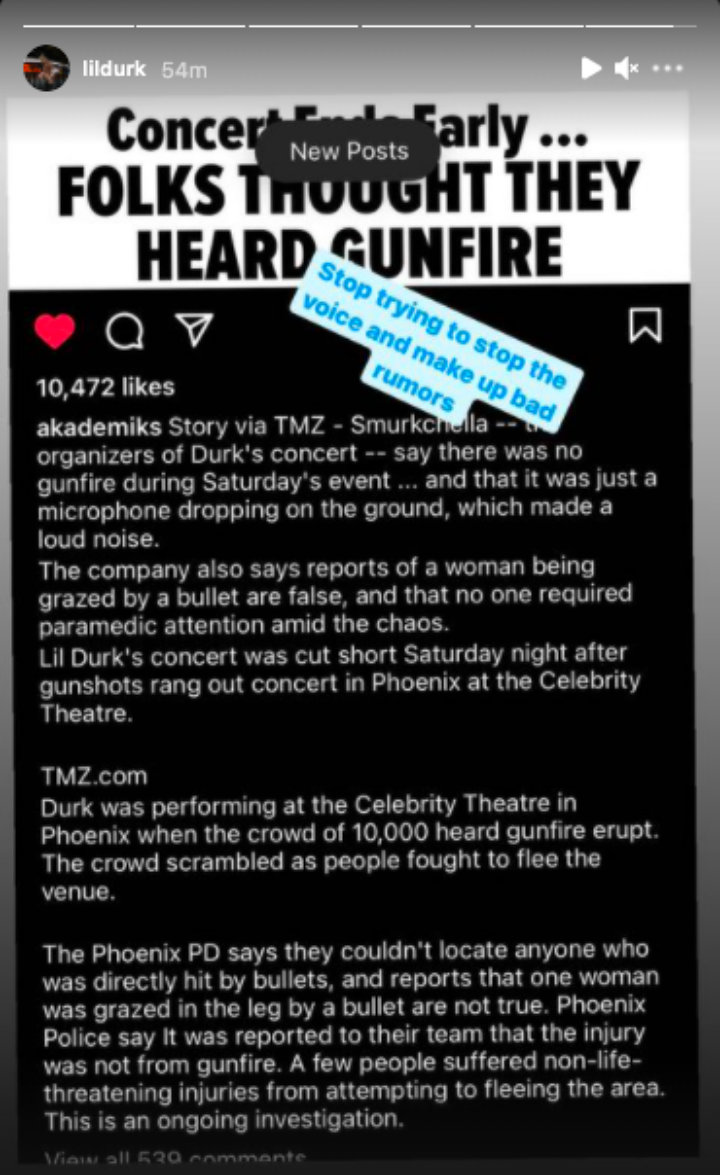 Lil Durk doubled down on his statement.

After TMZ's article was reposted by DJ Akademiks on his Instagram Account, Durk took to the comment section to write, "They make up stories when you lit." The MC then shared a screenshot of the YouTuber's post on Instagram Story, writing, "Stop trying to stop the voice and make up bad rumors."

Lil Durk Airs Being Pulled Over by Police on Instagram Live

Artist of the Week: Billie Eilish