The photos, in which the One Direction member wears a shell bra, fishtail and red wig, are reportedly taken as part of his 2019 photoshoot for 'Saturday Night Live'.

AceShowbiz - Harry Styles has caught social media users' attention with his pictures dressing as a Disney Princess. The One Direction member, who made no secret of his love for women's clothes, sent the internet into a frenzy after photos of him dressing as Ariel from "The Little Mermaid" were leaked.

The 27-year-old's snaps, which were reportedly taken as part of his 2019 photoshoot for "Saturday Night Live", made their round on Twitter. In the images, he could be seen wearing a white seashell bra, a latex green fishtail and a long bright red wig. Some of the pics saw him holding a glass of champagne and a cigarette.

The pictures have since garnered positive reactions from many. One in particular raved, "Harry styles as the little mermaid is the best thing of 2021." Another gushed, "I never believed in mermaids but harry styles made me believe." A third chimed in, "The only little mermaid I want to see is Harry Styles."

The responses did not stop there. More came forward with some hilarious comments. One individual quipped, "If I'm gonna catch a mermaid like harry styles I swear I'll put him in a big aquarium and stare at him each freakin' day." Someone else jokingly wrote, "JUST IN: Harry Styles confirmed to play as Ariel in the upcoming live action of Disney's 'The Little Mermaid'." 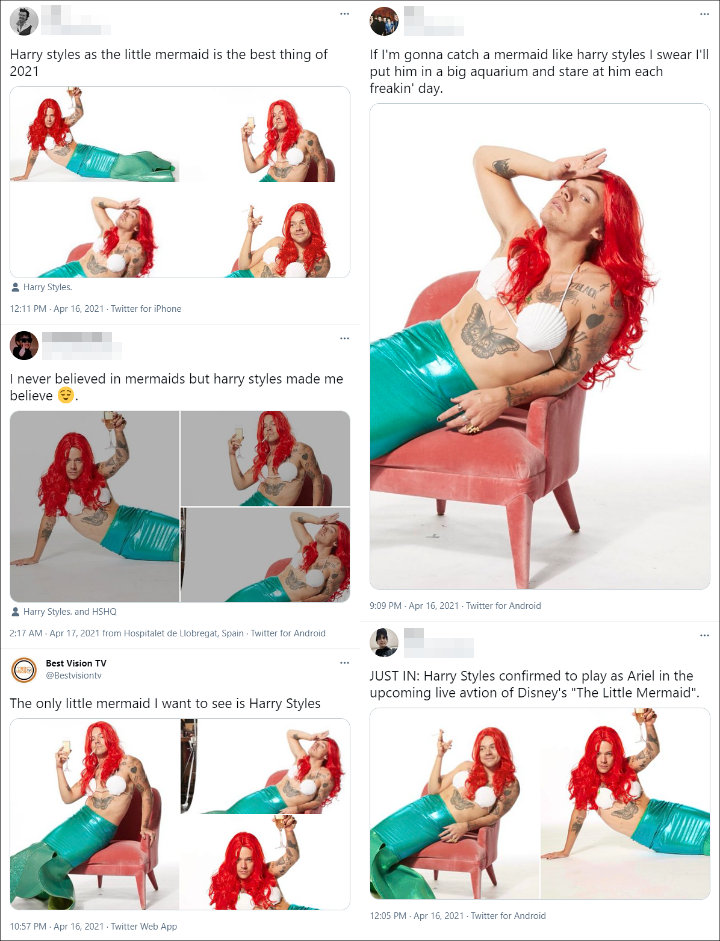 Harry Styles' fans were obsessed with pictures of him dressing as Ariel from 'The Little Mermaid'.

Harry himself has a large mermaid tattoo on his left forearm. When speaking to HollywoodLife.com in November 2014, he divulged, "My newest tattoo is of a mermaid." Asked what inspired him to get the artwork, he simply replied, "I am a mermaid."

In 2019, Harry passed on an offer to star as Prince Eric in the live-action version of "The Little Mermaid". On the reason why, he explained, "I want to put music out and focus on that for a while." When speaking about the film, he claimed, "But everyone involved in it was amazing. So I think it's going to be great... I'll enjoy watching it, I'm sure."

Harry Styles Gets Candid About When He Created His Worst Music