The YouTube star reveals he is in 'excruciating pain because part of [his] back is broken' following a car crash with his friend Daniel Lucas in Wyoming.

AceShowbiz - Jeffree Star knows he is lucky to be alive. Just hours after being rushed to the hospital following a severe car accident, the YouTube star took to social media to give an update on his condition, saying he is "grateful to be here still."

Making use of Twitter on Friday, April 16, the 35-year-old declared, "This morning was one of the scariest moments of our entire lives. I'm so grateful to be here still." He added, "I'm in excruciating pain because part of my back is broken and I have vertebrae fractures on my spine. My doctor said it will take a few months but I should make a full recovery."

The beauty guru went on to share an update on his friend Daniel Lucas, who was also with him during the car crash. He penned, "My best friend Daniel has internal injuries and because he has survived colon cancer three times, he's having complications with his organs and they're monitoring him 24/7. We'll know more soon. Thank you to every single person checking on us." 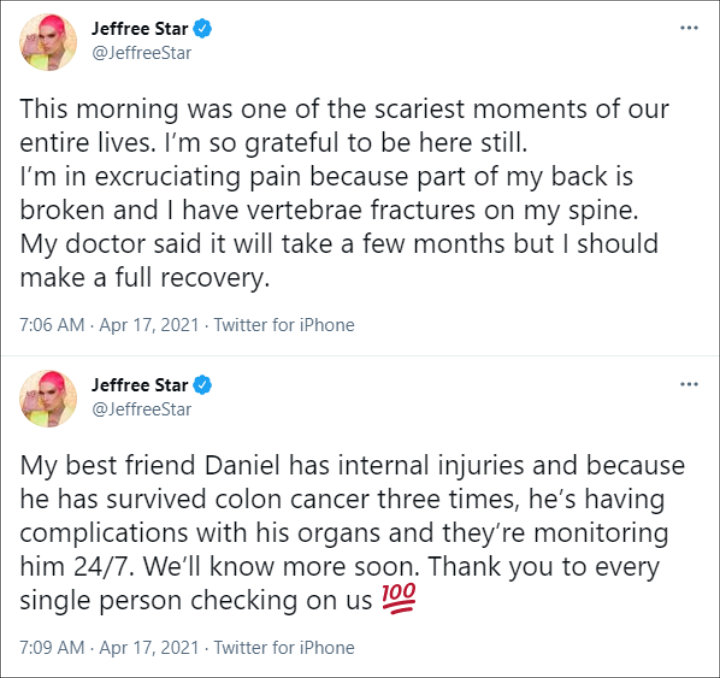 Hours prior to that, Jeffree's Twitter account divulged that he and Daniel were involved in a collision. Alongside a picture of him in a hospital bed while Daniel was by his side, the message read, "A few hours ago Jeffree and Daniel were in a severe car accident and the car flipped 3 times after hitting black ice. We will update you all when the doctor gives us more info. So thankful they are both alive." 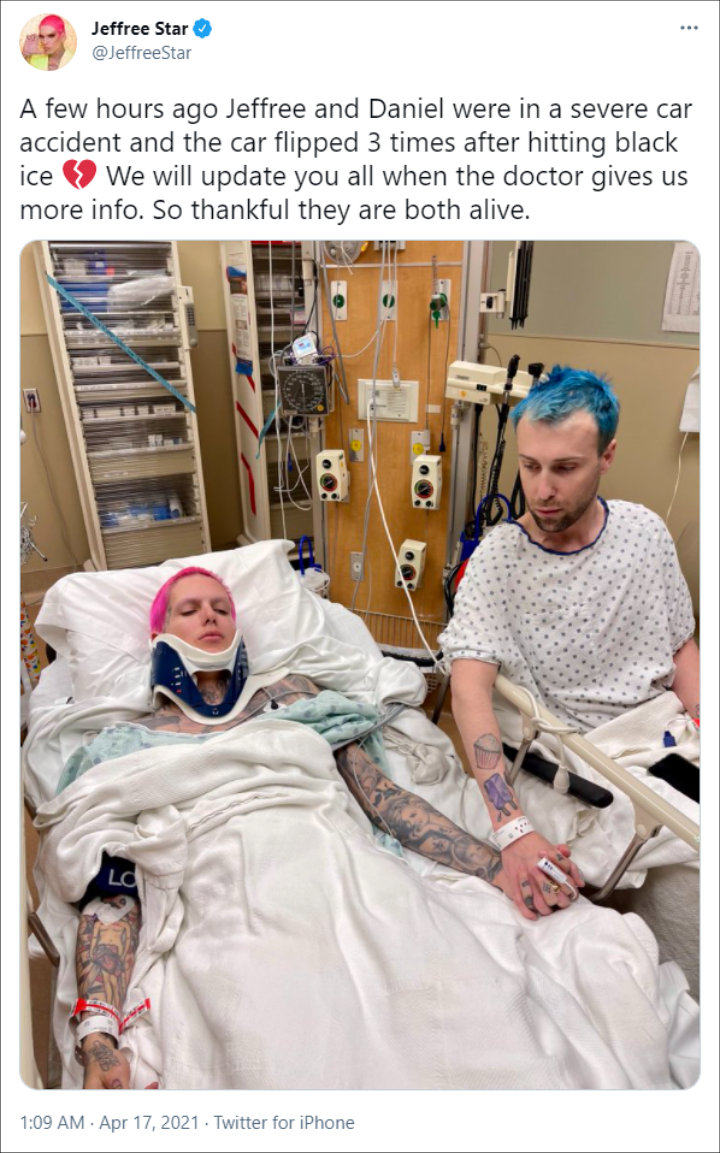 Jeffree has since received well wishes from fans. One user wrote, "I'm so relieved you're still with us. Sending all my love and prayers for as fast a recovery as possible. I love you so much." Another replied, "OMG..Please take care and do what you need to do..back injury is no joke. Sending healing prayers." A third chimed in, "Get better soon! Praying for you both to have a full smooth recovery, lots of love!"

The clash happened around 8.30 A.M. on Friday in Wyoming. Wyoming Highway Patrol Sergeant Jeremy Beck informed Fox News that both Jeffree and Daniel were wearing seatbelts as the former was behind the wheel. He suggested that drugs and alcohol did not appear to be a factor in the crash. KISS FM, meanwhile, reported that the two are still at the Casper Hospital.