Nikki, who welcomed her first child with fiance Artem Chigvintsev in July 2020, also directly responds to a fan who asked her if she's expecting a second child.

AceShowbiz - Nikki Bella is not pregnant with baby No. 2. The "Total Bellas" star took to her Instagram Story on Tuesday, April 13 to set the record straight when it came to rumors that she's eating for two.

"So, a lot of people have asked me this since the weekend, sucks, LOL," the retired professional wrestler shared. "But I talk about it on the podcast tomorrow. Hormones, body changes and holding eight pounds of water weight! Today back to normal!"

Nikki, who welcomed her first child with fiance Artem Chigvintsev in July 2020, also directly responded to a fan who asked her if she's expecting a second child. "No lol. My dress was baggy and with the number placement and being super bloated from travel and hormones (milk is coming to an end) I totally look it," so she wrote to the fan. "It is what it is lol. Had abs in the day and a little bell at night. #momlife." 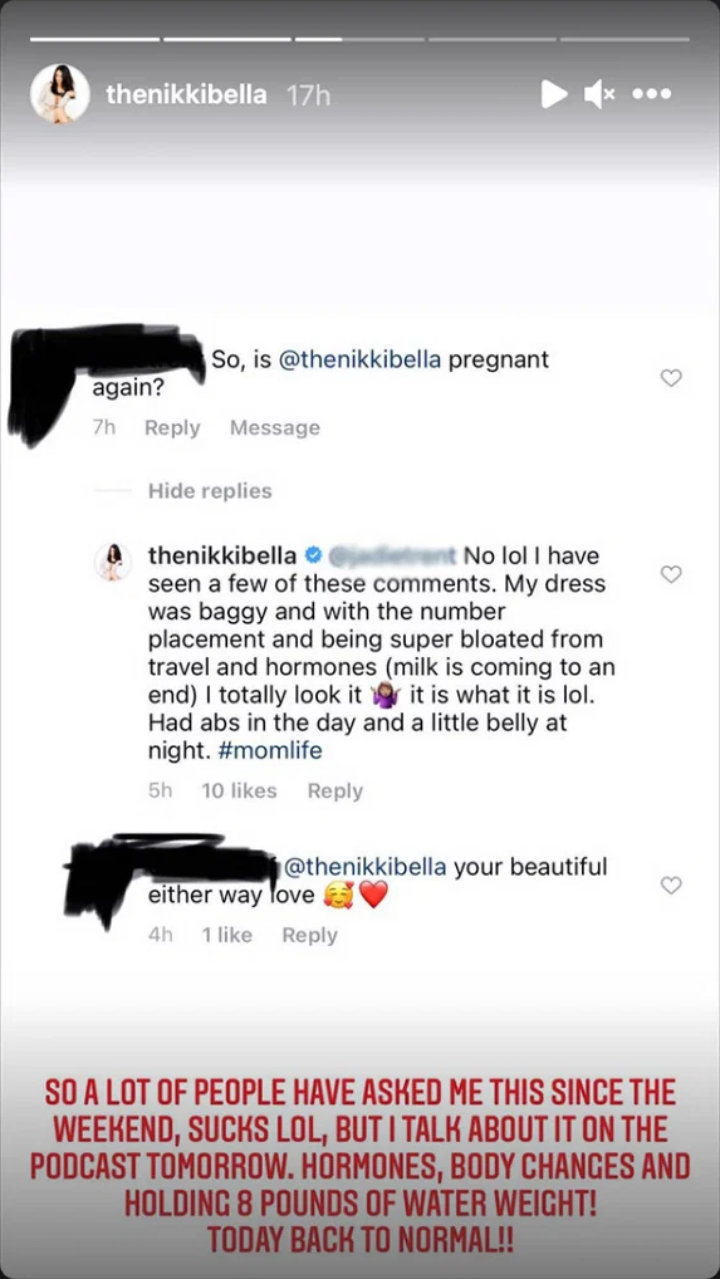 That aside, Nikki has been focusing on getting her pre-baby body back. Last month, the former WWE personality shared a video of her doing a workout alongside her twin sister Brie Bella. With Rihanna's "Umbrella" playing in the background, she wrote in the caption, "Kick Ass Sister Sunday! No drinks, just sweating! 3rd session with the one and only @coachscotthom and many more to go! Making that comeback."

She also shared how she and her dancer fiance maintained a healthy lifestyle. "We've been working...working out hard, training hard," she told her followers, before showing their prepped veggie meals to the camera. She added, "I'm not gonna even have a glass [of Labry] or a sip, but I love Labry," while showing a bottle of wine.

The mom of one also proudly showed off the result of her intense workout. Flaunting her toned abs, she wrote, "With healthy eating, increase of workout activity and Emsculpt Neo this Mama is almost back to her pre baby body!"

Ivanka Trump Receives First Dose of COVID-19 Vaccine: 'I Got the Shot'

Nikki Bella Shows Off Video of Workout to Get Her Pre-Baby Body Back: Making That Comeback

Nikki Bella and Artem Chigvintsev to Get Married in November