Aside from Demi, 'The Bachelor' alum receives support from his other former contestants including Nicole Lopez-Alvar, Tayshia Adams and Hannah Godwin after coming forward with his sexuality.

AceShowbiz - Colton Underwood has been showered with love from Demi Burnett and other Bachelor Nation stars after coming forward with his sexuality. Shortly after coming out as gay, the season 23 star of "The Bachelor" was "welcomed" by his former contestants.

Demi, who came out as queer after being eliminated by Colton during week 6 of the dating show, took to her Twitter page to support him. In the Wednesday, April 14 post, she raved, "Welcome to the community brother."

Aside from Demi, one of Colton's contestants Nicole Lopez-Alvar turned to Twitter to gush, "I'm so proud of you @colton!" Onyeka Ehie also declared on her own blue-bird site account, "Happy for @colton for speaking his truth. We support you." 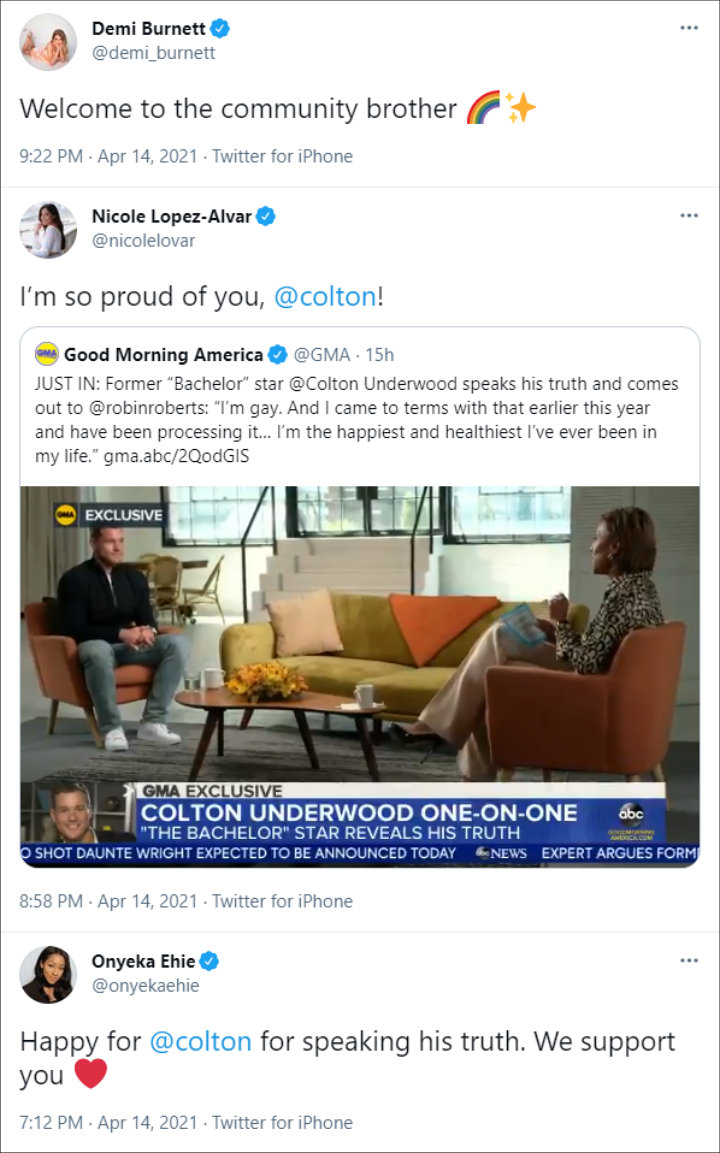 Hannah Godwin, the runner-up on Colton's season, said in a statement to the press, "I support Colton for having the courage to finally be able to live his life authentically." She added, "Nobody should have to hide from who they really are. I'll always wish Colton the very best and hoping he has found his peace."

Meanwhile, Tayshia Adams, who was one of the ex-footballer's final three women during his season on "The Bachelor", reportedly has no "ill will" toward him. A source further told Page Six, "Tayshia is very happy that Colton is able to now live his life openly and without fear of sharing who he is."

Colton came forward with his sexuality when speaking to Robin Roberts (II) in the Wednesday episode of "Good Morning America". In the conversation titled "Colton Underwood: In His Own Words", he divulged that he "came to terms" with his sexuality earlier this year.

"I've ran from myself for a long time. I've hated myself for a long time, and I'm gay. I came to terms with that earlier this year and trying to process it," the 29-year-old TV personality disclosed. "I'm emotional, but in such a good happy positive way. I'm happiest and healthiest I've ever been in my life."

"The Bachelorette" alum went on to admit that he knew he was "different since the age of 6" and had got "into a place for me in personal life that was dark and bad." He then added, "I think overall the reason why now, is because I got to place that I don't think I was ever going to share this. I think I would rather die than say I'm gay."