The ailing rapper's manager Steve Rifkind uploads a video to confirm that the star 'is still alive and he is still on life support' despite reports stating otherwise.

AceShowbiz - Some Twitter users and news outlets have jumped ahead with their death tributes to DMX, prompting the star's camp to issue a clarification. On Thursday, April 8, the rapper's manager Steve Rifkind posted a video on Instagram to shut down death rumors about the 50-year-old emcee.

"Everybody, please stop posting with these rumors," Steve said in the clip. "DMX is still alive. Yes, he is on life support," he confirmed, before begging with people to stop spreading false rumors about the star. "...but please," he pleaded. "It's not helping anybody by seeing these false rumors. Let the family relax for a night."

He went on assuring DMX's fans, "You will be hearing a statement from the family sometime tomorrow. I've been with DMX for the past three years, so the only thing I ask is just stop with the rumors. He is still alive and he is still on life support."

Earlier on the same day, social media users caused a confusion as they began posting with #RIPDMX hashtag on Twitter. Some people pointed out that it's possibly Luenell's post that prompted it all, as she wrote on her Instagram Story, "It is over my friend gone soar w/the (a bird emoji) join the best that ever did it RIP......DMX."

The comedian/actress, however, later clarified that she meant DMX's soul has gone, but not his body. She wrote in a follow-up post, "When your spirit leaves and your organs fail you, the body becomes just a shell. One becomes wrapped in the lords arms. That's what 'I' call gone. Im sorry to all. #DMX." 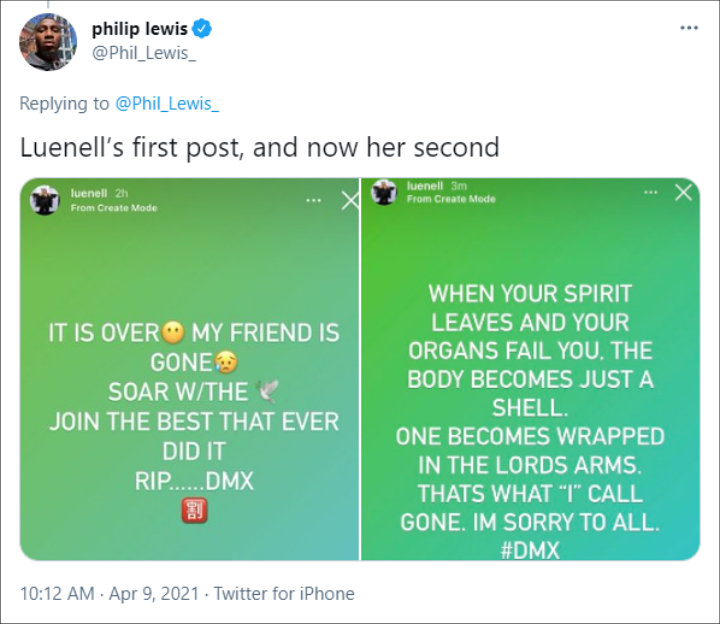 DMX has been hospitalized since he suffered from a heart attack at his home on Friday night, April 2 that may have resulted from an overdose. Doctors performed a barrage of tests on Wednesday and the results were reportedly "not good." Sources with direct knowledge told TMZ that the tests showed no improvement in the 50-year-old's brain activity since he was rushed to the hospital. His family is expected to make a decision of DMX's medical future following the tests.

It was previously reported that the rapper, whose real name is Earl Simmons, had to be revived three times and was deprived of oxygen for nearly half an hour despite the resuscitation efforts.

DMX's Estate Worth Less Than $1 Million at Time of Death, Court Papers Show