Having undergone procedure to remove the abnormal skin growth inside his ear canal, the 21-year-old son of the Rolling Stones frontman jokingly rates his hospital gown 2 out of 10.

AceShowbiz - Mick Jagger's son with TV presenter Luciana Gimenez has offered an update on his condition after undergoing an ear surgery. Making use of his social media account, Lucas Maurice Morad candidly confessed that he hasn't left his bed because of one particular reason.

On Tuesday, April 6, the 21-year-old shared on his Instagram Story about how he really feels post-surgery. Along with a selfie of himself, he wrote over a purple background, "Haven't left my bed. I'm dizzydizzydizzy." In a following story, he uploaded a montage of selfies that showed off his bandages, and an emoji-filled caption. 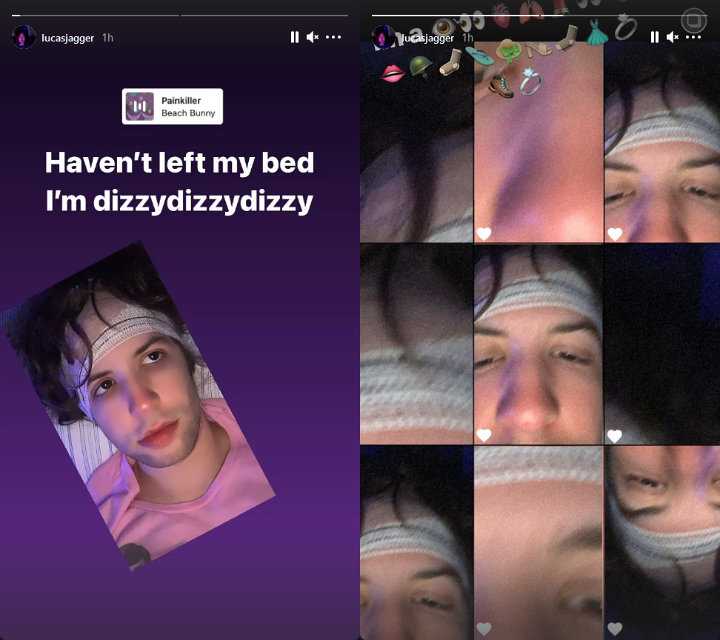 Lucas shared the update on his condition after undergoing an ear surgery.
See also...

Lucas' Stories came hours after he shared with his followers that he has undergone a medical procedure for his ear. On Tuesday, he posted several photos from the hospital. Some of the images saw him wearing bandages over his ears, sitting in a wheelchair, and wearing a hospital robe. He captioned the post, "He's ok," before giving his rates, "Ear surgery 10/10. Fit pics 2/10."

Lucas' mother, Luciana, additionally revealed via her own Instagram Stories that he had a tympanomastoidectomy and had a cholesteatoma removed. The Genetic and Rare Diseases Information Center explained that cholesteatoma corresponds to the abnormal growth of skin inside the ear canal that "commonly occurs as a complication of chronic ear infections."

A tympanomastoidectomy, per Kaiser Permanente, is a medical procedure used "to treat chronic ear infections that have weakened the eardrum and tissue in and around the ear." And, the dizziness that Lucas experienced post-surgery was actually a normal effect. The site pointed out as a warning, "You may feel dizzy for a few days after surgery."

Lucas is one of Mick's eight children. The "(I Can't Get No) Satisfaction" hitmaker has a daughter Karis with Marsha Hunt and another daughter Jade with ex-wife Bianca Jagger. With model Jerry Hall, he shares two daughters Elizabeth and Georgia, and two sons James and Gabriel. He also has a young son Deveraux with current girlfriend Melanie Hamrick.