The studio assures both filmmakers will be on board should it decide to move forward with the adaptation of Jack Kirby's comic books and the horror project centering on the 'Aquaman' sea monsters in the future.

AceShowbiz - Though there's always room in fans' heart for DC Comics adaptations, Warner Bros. has so much on its slate that it cannot go on will all projects that have been proposed. Narrowing down its upcoming movies, the studio has put Ava DuVernay's "The New Gods" and James Wan's "The Trench" on the chopping block.

"As part of our DC slate, some legacy development titles including 'New Gods' and 'The Trench' will not be moving forward," Warner Bros. and DC announced their decision in a statement on Thursday, April 1. "We thank our partners Ava DuVernay, Tom King, James Wan and Peter Safran for their time and collaboration during this process."

Making it clear that they always appreciate DuVernay and Wan's creative minds, they added that they "look forward to our continued partnership with them on other DC stories" and assure "the projects will remain in their skillful hands if they were to move forward in the future."

DuVernay herself took to Twitter to react to the news. "Tom, I loved writing NEW GODS with you. I'm upset that the saga of Barda, Scott, Granny, Highfather and The Furies ends this way," she expressed her disappointment. "Diving into Kirby's Fourth World was the adventure of a lifetime. That can't be taken away. Thank you for your friendship. And remember... #DarkseidIs." 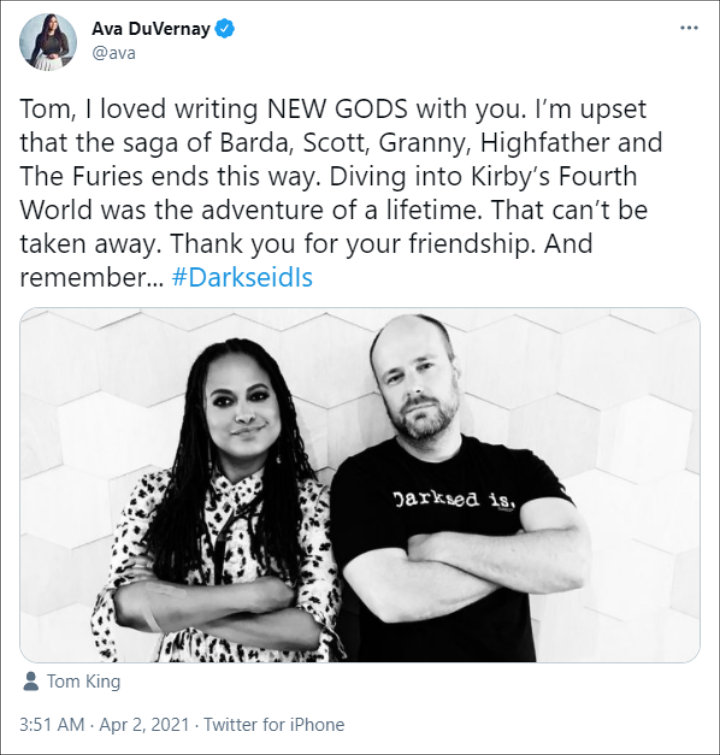 Her fans were equally upset over learning of the news, with one admitting, "I'm so bummed about this." Another weighed in, "Sad about the project been cancelled, i know you and King would deliver a killer movie."

"Well, this is awful. I was looking forward to see you bring Jack Kirby's Fourth World to the big screen," a third commenter reacted. Someone else echoed the sentiment, "How immensely upsetting. Sorry to hear this."

DuVernay had been developing "New Gods" with Tom King since 2018 based on the comic book characters created by the late and legendary artist Jack Kirby. The "A Wrinkle in Time" director remains in the DC fold as she's currently working on DC series "Naomi" for The CW.

As for "The Trench", the "Aquaman" spin-off was supposed to put the spotlight on the deadly amphibious creatures that attacked the titular superhero and Mera in the 2018 movie. The horror-tinged project was planned to be made on a much more modest budget than a normal DC superhero tentpole, with Noah Gardner and Aidan Fitzgerald being tapped to write the script.