Marking the second anniversary of the day her rapper boyfriend was gunned down, the 'Baggage Claim' actress writes a poetic prayer as a heartfelt tribute to her longtime love.

On Wednesday, March 31, the 36-year-old posted an Instagram photo of her late boyfriend. Along with it, she noted that his death "changed the course of [her] life forever." She continued to admit, "2 years, and it feels like yesterday and eternity all at the same time. Grief and Healing have been constant companions on this journey."

Expressing her love for Nipsey, Lauren wrote, "In Honor of His life and demonstration... May all of Heaven exalt Your name for all You did on Earth and beyond." She went on to praise him, "Brave and Beloved Soul, Ermias. You are missed deeply. You are loved immensely. You will forever be. I love you eternally. Your Boogie [love]."

The "ATL" star has also made use of Instagram Story to further remember her late love. One of her posts displayed a collage of three photos that saw her, Nipsey and their 4-year-old son, Kross, throwing their fist in the air. 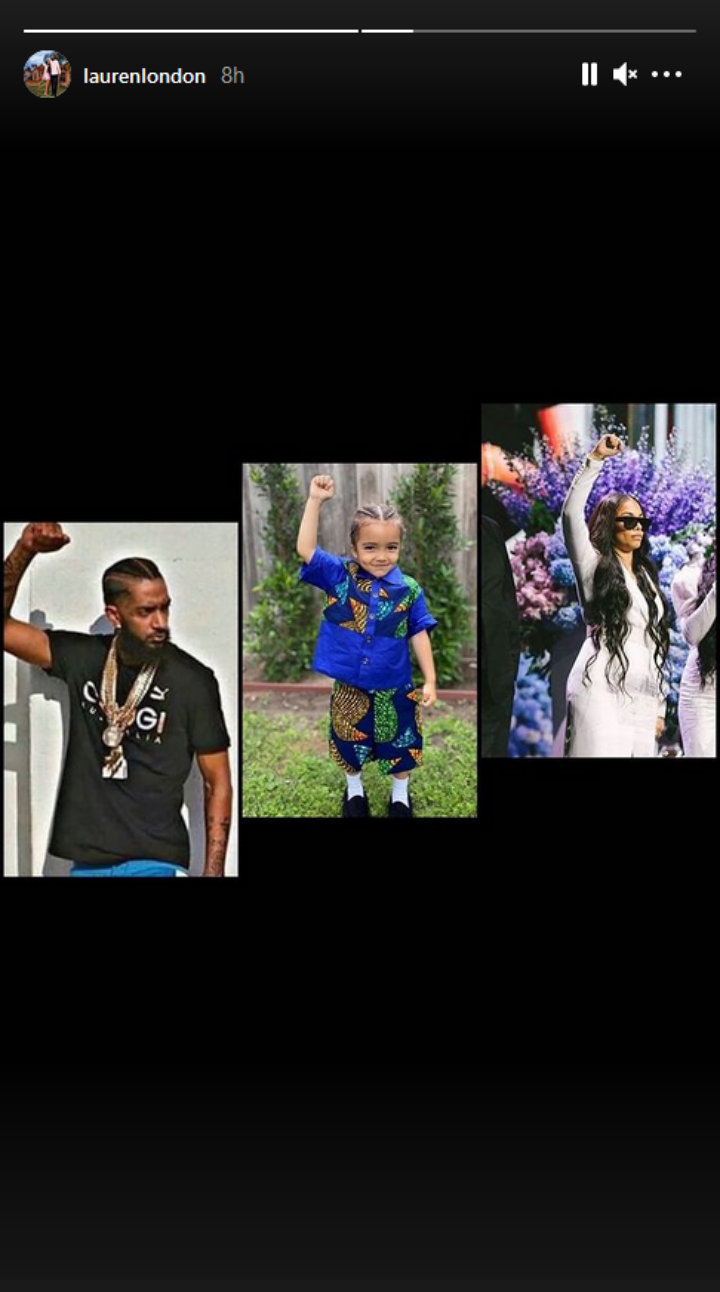 Lauren London shared throwback photos of her, Nipsey and Kross to mark the second anniversary of Nipsey's death.

Lauren and Nipsey were together for five years before his tragic death. He was gunned down in South Los Angeles on March 31, 2019, outside of Marathon Clothing. Aside from sharing Kross together, the twosome also raised her son with Lil Wayne, 11-year-old Kameron and the "Racks in the Middle" rapper's 9-year-old daughter, Emani, from his past relationship with Tanisha Foster.

The actress has honored her late boyfriend on several different occasions, including on Valentine's Day. At the time, she shared a slide of Instagram photos that featured a snap of herself looking up to the sky in addition to the portrait of the "Hussle & Motivate" singer. In the caption, she wrote, "'Look Up Boogie' God Is Love. [love]."

In August 2020, Lauren also posted a heartfelt Instagram tribute to celebrate what would have been Nipsey's 35th birthday. Posting a portrait of him, she wrote, "King Ermias. Best friend. Twin Flame. Greatest Teacher. Beautiful Strong Vessel. The Spiritual Giant that walked Earth. 'I Miss You' will never be deep enough for the void left in my soul. Yet, I know you walk with me- always still. Happy 35th. Eternally Yours, Boogie."