The New England Patriots offensive tackle is honored with an 'Outstanding Citizen' certificate by the Tempe Police Department for his aid in thwarting the alleged attack on an elderly woman.

AceShowbiz - Justin Herron has made use of his tackling skills for good cause outside football court. The NFL star has been hailed a real-life "hero" by cops after stopping an attempted sexual assault on an elderly woman at a park.

The New England Patriots offensive tackle and local civilian Murry Rogers were honored by the Tempe Police Department on Wednesday, March 24 for their aid in thwarting the alleged attack. The two men were presented with an "Outstanding Citizen" certificate by the department at a news conference.

"We are here to honor two good Samaritans that intervened during this vicious attack and detained the suspect until police could arrive and make sure that he was taken into custody," detective Natalie Barela said at the news conference. "If not for the swift actions of Mr. Justin Herron and Mr. Murry Rogers, this vicious attack could've been much worse."

"Our sincere gratitude to the two hero’s that saved an elderly victim of a vicious attack. Can’t miss this story," the Tempe Police posted on Twitter along with photos of Justin and Murry at the press conference. 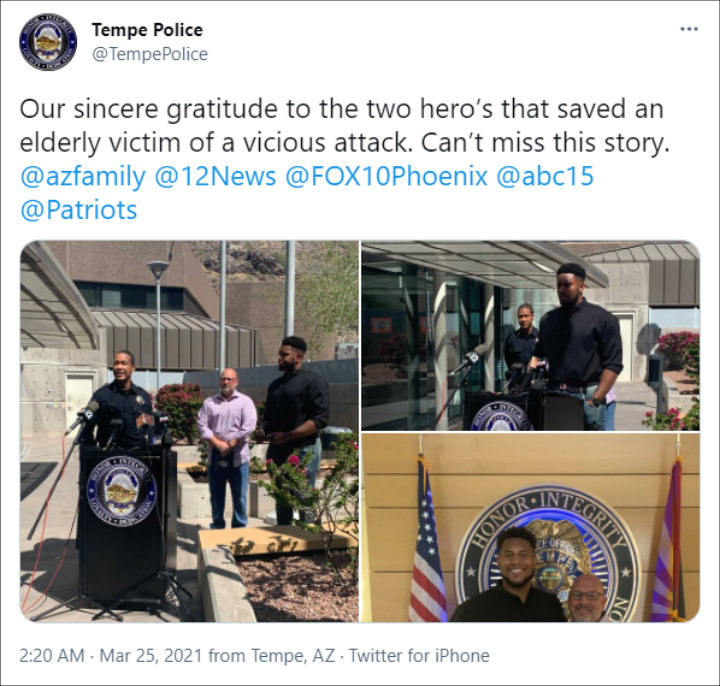 Justin was walking around Kiwanis Park at 11 A.M. on Saturday, March 20 in Tempe when all of a sudden he heard screaming in the park. When he approached the scene, he saw a man lying on top of a woman and acted quickly. "I just knew that in that moment I had to go and had to put a stop to it," the 25-year-old athlete said. 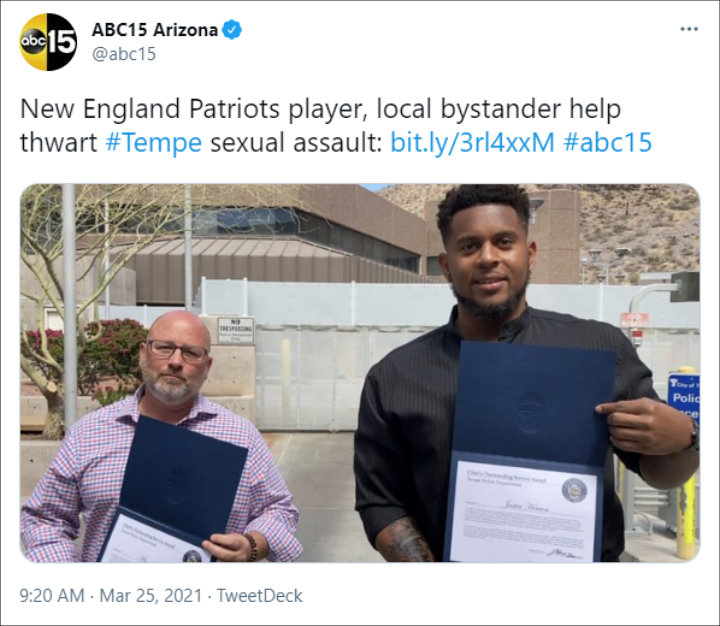 Justin, who stands 6-foot-5 and weighs about 300 pounds, said he screamed at the man to get off before pulling the guy away from the woman. "I'm a football player, I'm kind of big," he explained his reaction at the time. "I try not to be too aggressive with people knowing I could potentially hurt somebody. I do have a loud voice. I yelled, told him to get off of her, and then yanked him off and I told him to sit down and I told him to wait until the cops come."

Cops identified the suspect as 30-year-old Kevin Caballero. The victim, meanwhile, was a 71-year-old, who was able to meet Justin and Murry after the incident. She called the two men "her angels," said Murry. Authorities said "there was not a dry eye in the room" when the victim met with Justin and Murry.