In the wake of the former child actor's passing, the 2006 movie's director Adam McKay offers tribute on social media, saying that he's 'heartbroken and stunned.'

AceShowbiz - "Talladega Nights The Ballad of Ricky Bobby" star Houston Tumlin has passed away. The former child actor, who was best known for playing Will Ferrell's foul-mouthed son in the 2006 movie, died by suicide at age of 28.

Confirming Houston's death was The Shelby County Coroner's Office coroner, Lina Evans. Lina told TMZ that he shot himself in the head at his Pelham, Alabama home around 4.30 P.M. on Tuesday, March 23. The coroner added that his girlfriend was inside the house when he took his own life. No note has been found so far.

In the wake of Houston's passing, "Talladega Nights" director Adam McKay paid a tribute on Twitter. "Truly heartbroken and stunned at Houston's passing. He was a joyful and talented person. Will never forget the laughs and good times we had. Sending love and prayers to his family and friends," so read the tweet. 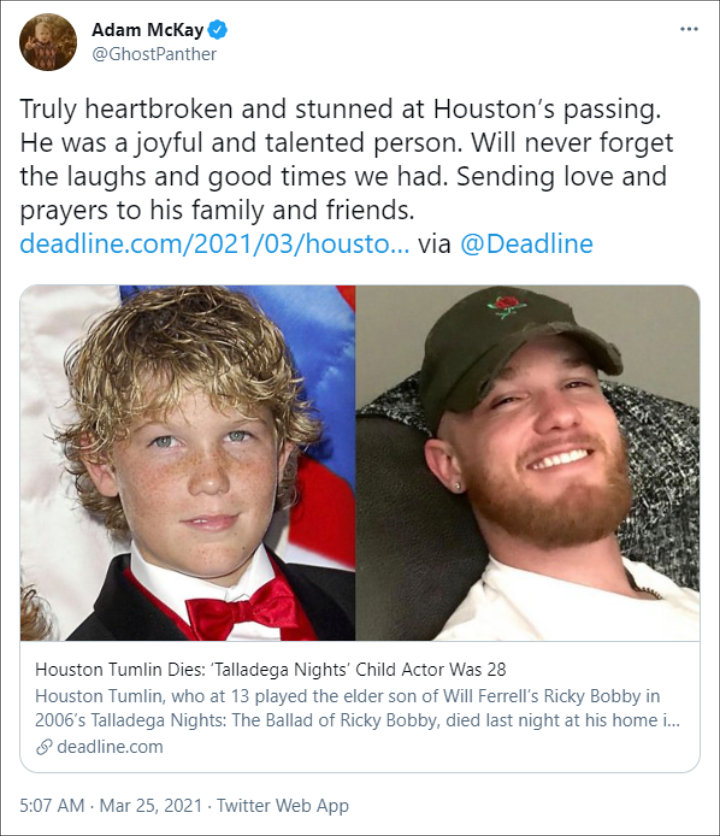 Adam McKay paid tribute to Houston Tumin in the wake of the latter's death.
See also...

Houston's girlfriend, Charity Robertson, expressed her grief via Facebook. Sharing several pictures of her and her late boyfriend, she wrote, "I've never experienced a hurt like this before. I feel numb, I feel defeated, I feel lost. I feel empty. My heart is absolutely shattered. My sweet, sweet baby.. Our time together was one of the best experiences of my life."

"I'll miss your big heart, caring spirit, infectious laughter, & oh man could the list go on," Charity went on. "I love your smart mouth, your 'i'm always right' attitude, your hugs, your kisses, your touch.. Just YOU! I just still feel like this is a really bad dream that I can't wake up from."

"One thing is for sure though, I have the absolute best guardian angel a girl could ever wish for cause everybody knows you don't play about me," she further noted. "I love you so much Houston Lee & thank you for loving me so passionately and unapologetically for the time we had each other."

"Talladega Nights" marked Houston's only acting credit. TMZ reported that he was serving in the Army's 101st Airborne Division at Fort Campbell in 2015. His other jobs included repairing telephone lines.