What starts as a criticism over the 'WAP' hitmaker's Grammy performance ends with the political commentator accusing the raptress of posting Photoshopped tweet suggesting her husband cheated on her with her brother.

It all started as Candace blasted Cardi over her raunchy performance at the 2021 Grammy Awards, calling it "an attack on American values." Unfazed by it, the Grammy Award-winning artist tweeted, "Love it or hate it, criticize it, judge it JUST BRING THE VIEWS IN... NUMBER 1 trending," as she celebrated video of her performance passing the four million views mark.

The back-and-forth then turned to their views on feminism and black culture, with Candace claiming that Cardi is "a part of a larger cancer that is manifesting in black culture" and suggesting that she brought dishonor to black women.

The "Bodak Yellow" hitmaker hit back, writing to Candace, "After all the fighting for equality and freedom they should be submissive to a white man after years of abuse & rape." Candace defended herself, insisting that "cooking for your family is not submissive" and her "relationship is healthy."

From there, things only got more personal, with Cardi bringing up Candace's old tweet in which she seemed to acknowledge that her husband "did cheat" on her with her own brother. The conservative author, however, claimed that the tweet was fake and the 28-year-old femcee only helped spread the Photoshopped tweet as "real." Candace wrote back to Cardi, "You tweeted that the photoshopped tweet was real and you saw it on a day that I was trending-which is a lie. You made that part up to help circulate a slanderous lie."

As Cardi insisted that the tweet wasn't Photoshopped, Candace then gave Cardi an ultimatum to recant her claim before she takes legal action against the raptress. "Asking one more time before I get the lawyers to make you publicly admit you're lying and embarrass yourself," she threatened the "I Like It" femcee.

Cardi B responded after Candace Owens threatened to sue her. 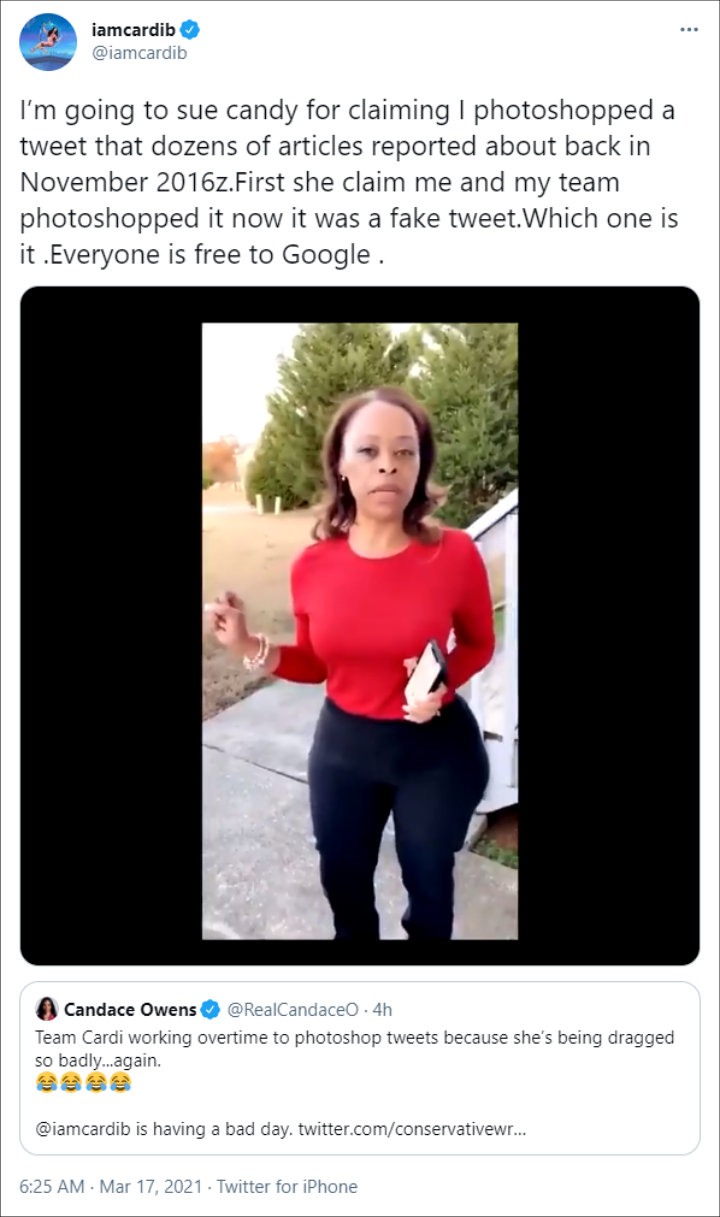 Cardi threatened to sue Candace back.

Cardi, however, believes that she's speaking the truth, citing a previous report which said that Candace tweeted and deleted the said tweet at the time. She then fought back by declaring that she's going to sue Candace for saying she spread a lie. "I'm going to sue candy for claiming I photoshopped a tweet that dozens of articles reported about back in November 2016z.First she claim me and my team photoshopped it now it was a fake tweet.Which one is it .Everyone is free to Google," so Cardi claimed.

Candace Owens Blasts Cosmopolitan for Glamorizing Obesity: You Should be 'Ashamed'