The 'Underworld: Blood Wars' actress savagely shuts down the hater who leaves a negative comment on an Instagram photo featuring the 47-year-old flashing her toned abs.

AceShowbiz - Kate Beckinsale is not here for any negative comments. Finding herself being accused of going through a "midlife crisis" by an online troll for sharing a sexy picture, the "Underworld: Blood Wars" actress set aside time to savagely hit back at the hater.

The 47-year-old, who leads new dark comedy "Guilty Party", first shared on Instagram a behind-the-scenes photo taken inside her trailer. The Friday, March 12 post saw her wearing sweatpants and lifting up her sweater to flash her toned abs. In the accompaniment of the post, she wrote, "Well hello #guiltyparty @cbstvstudios #paramountplus.

Kate's post caught the attention of one critic who left a negative comment that simply read, "#midlifecrisis." In response, the ex-wife of director Len Wiseman fired back, "Oh babes don't worry. Just lose the fade and the cheesy sunglasses and no one will know unless you buy a Ferrari which seems not likely." 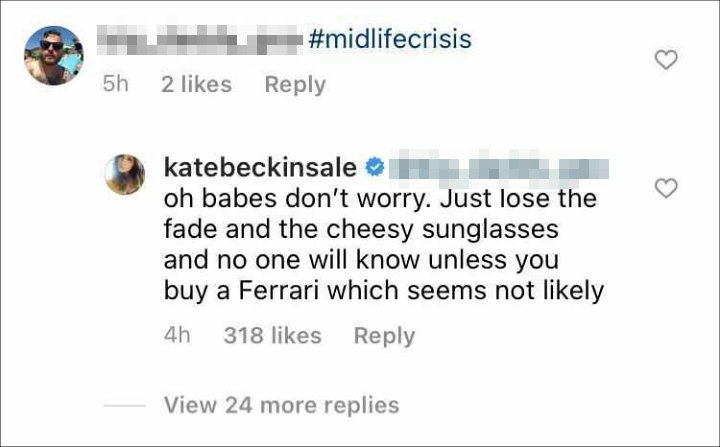 Kate Beckinsale slammed a troll accusing her of going through a 'midlife crisis.'

Despite the naysayer, the Georgia Wells of "The Widow" was showered with compliments by many others. One gushed, "Oops accidentally obsessed with you." Another raved, "You're absolutely gorgeous." A third exclaimed, "Can you do no wrong?!?! Always stunning."

This was not the first time Kate was forced to defend herself from social media trolls. Back in January, she blasted a fan who demanded "beautiful pictures" of her. At that time, she posted an image of her and her friends wearing sunglasses and masks printed with a dog's face to twin her pup. "We're on a mission from God," she captioned it.

Many of her followers praised the hilarious shot, but one person wrote, "You are a beautiful woman. Why do you post pictures like that? I'd rather see beautiful pictures of you." Not impressed by the remark, she raged, "To **** with you personally of course." The individual then asked why she had to be so "mean," but the "Serendipity" star seemed to have done with her reply.

Kate Beckinsale Reveals Her Genius IQ, Insists Being Brainy Is 'Handicap' in Hollywood

Kate Beckinsale Breaks Silence on Hospitalization: I Injured My Back While Putting on Leggings