HBO Max users clicking to watch the CGI/live-action comedy film of the famous cartoon duo are surprised that Snyder's cut of the superhero film plays instead.

AceShowbiz - "Zack Snyder's Justice League" came 10 days early for some unsuspecting HBO Max subscribers. On Monday, March 8, fans were surprised by the sudden arrival of the long-awaited director's cut of the superhero movie, but they might not get to see it until the end.

The anticipated four-hour film from Synder was up for at least an hour and accidentally played in place of "Tom & Jerry" on the streaming service. Doug Bass of Charlotte, North Carolina was one of those surprised users and he brought to light the accidental release on Twitter.

Bass said he just wanted to put the CGI/live-action comedy film for background noise while he worked on Monday afternoon when "The Snyder Cut" played instead. "@hbomax someone's getting fired...Tom and Jerry this is not...#SnyderCut," he tweeted.

He went on gushing about the superhero movie, "The CGI finally rivals that of Marvel and you're gonna love it. That's all im saying. No spoilers. Get excited." While he claimed that he's "never been a huge DC movie fan," he raved that "it is the best DC film I've ever seen."

Bass told Variety about an hour into the feed, he noticed the definition of the image began to degrade, then an error message appeared on his screen and the film disappeared. When he attempted to restart the film, "Tom & Jerry" played instead, suggesting that HBO Max has fixed the error by that time. 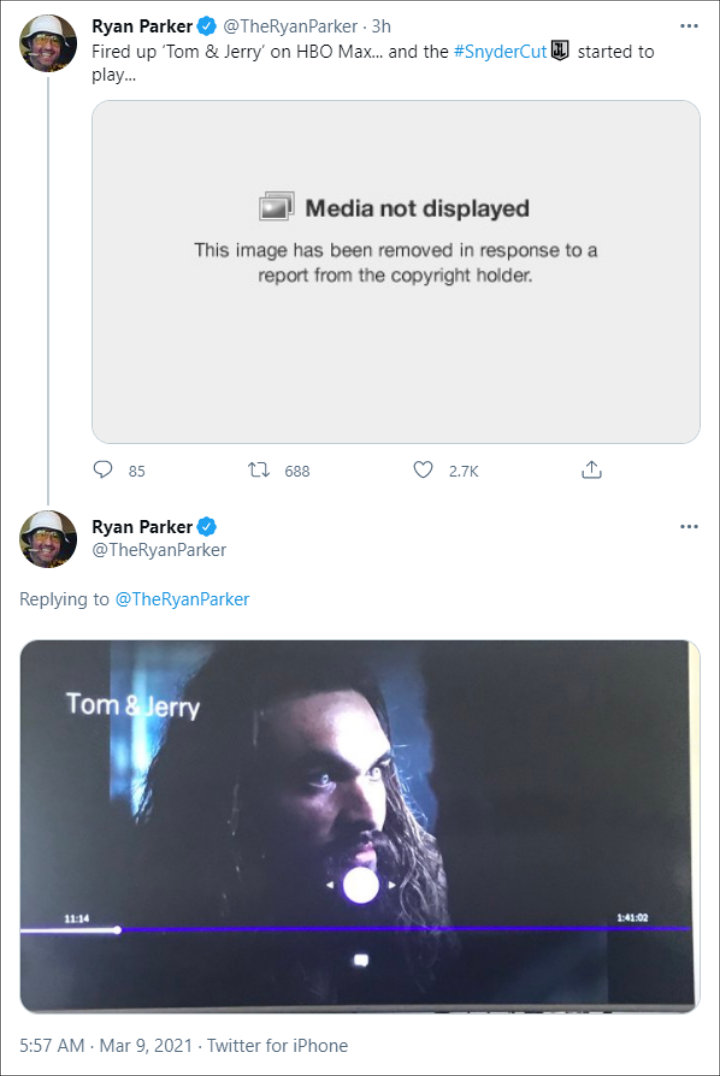 HBO Max has released a statement on the technical glitch. Seemingly confirming that it's Snyder's version that viewers watched, a spokesperson from WarnerMedia said, " 'Zack Snyder's Justice League' was temporarily available on HBO Max and the error was addressed within minutes."

"Zack Snyder's Justice League" isn't due until March 18. Snyder's version of the film will include some new scenes which he filmed, with Jared Leto, Amber Heard and Joe Manganiello reprising their roles as Joker, Mera and Deathstroke respectively.