Months after his angry rant at film crew on the 'Mission: Impossible 7' set went viral, the Hollywood star is said to stop by the ExCel Centre in East London to meet NHS staff.

The actor is said to have stopped off at the center in London, where he met with NHS staff who have been working tirelessly amid the ongoing pandemic.

"It's well known that Tom has been properly hammered by COVID as he tried to complete work on his next blockbuster," a source told Britain's The Sun newspaper. He told his team he wanted to pay his personal tribute to frontline health staff who have helped get movies back on track. He visited NHS staff at the ExCel Centre in East London on Thursday.

"They were really shocked to see such a huge movie star. Tom wanted to keep it a secret and ensure it was a nice surprise for them."

Tom's special visit comes after he went viral in December after a video surfaced of him raging at crew members on the set of "Mission: Impossible VII" - which has been filming in the U.K. - for not socially distancing on set, amid fears a COVID breakout could have shut down production.

He was seen yelling, "If I see you do it again, you're f**king gone. And if anyone in this crew does it, that's it."

Tom moved filming to the U.K. from the U.S. after production was initially put on hold in March last year (2020) due to the global coronavirus pandemic.

He took part in a video call with Culture Secretary Oliver Dowden, who confirmed that filmmakers are exempt from quarantine rules for those arriving from certain countries and explained how it would allow the blockbuster to resume filming at Warner Bros Studios in Leavesden.

Dowden wrote on Twitter, "New exemption from quarantine rules for filmmakers means we can start making the best blockbusters again. Great to talk to Tom Cruise last weekend about getting the cameras rolling again on 'Mission: Impossible 7'." 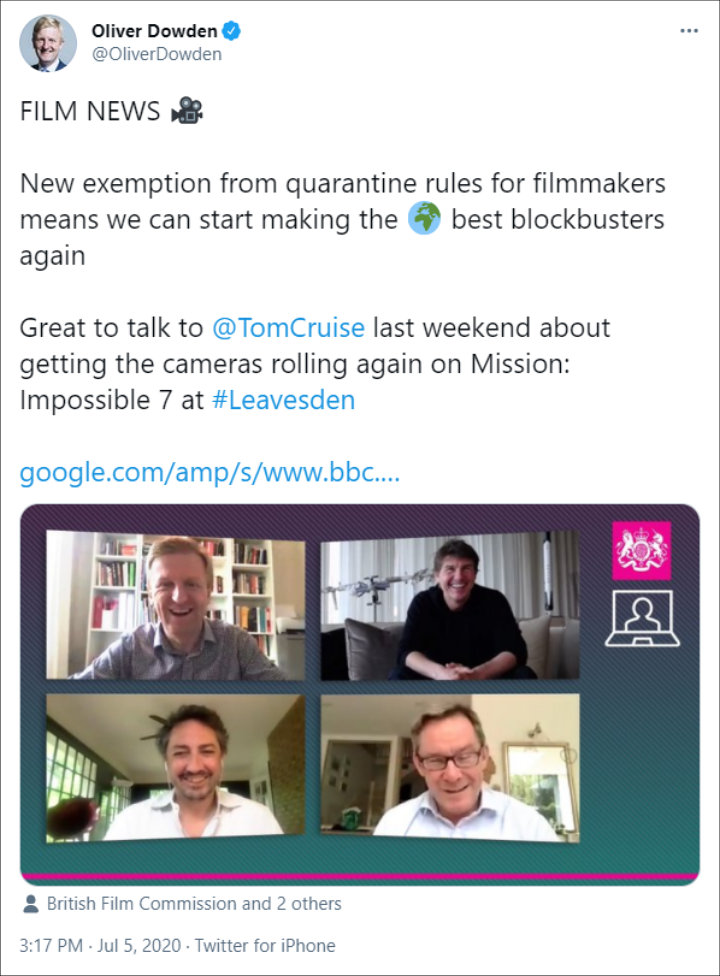 The politician added, "The world's biggest blockbusters and high-end TV shows are made in Britain. We want the industry to bounce back and exempting small numbers of essential cast and crew from quarantine is part of our continued commitment to getting cameras rolling safely again."