The 'Ted Lasso' co-creator and star gives his ex-fiancee a shout-out when delivering his speech for Best Comedy Series, crediting her for giving him the idea to make the Apple TV-Plus series.

AceShowbiz - Jason Sudeikis thanked his ex Olivia Wilde for coming up with the idea of his "Ted Lasso" TV show, after the Apple TV+ programme won big at the Critics' Choice Awards on Sunday night (March 7).

In his remote acceptance speech for Best Comedy Series, Jason gave a shout out to Olivia, and credited her with the idea for the programme.

"Holy Smokes, OK. A great number of you have been so vocal about your enjoyment of this show and we've greatly appreciated it..." he said. "I want to thank my kids, Otis and Daisy, and I want to thank their mom, Olivia, who had the initial idea for this as a TV show. She was like, 'You guys like doing that so much, you should do it as a movie or a TV show,' and she was right!"

"This has been a wack-a** year, and this has been a wonderful vessel to hear people's stories of forgiveness and redemption and heeling and understanding."

And following his victories, Olivia took to Twitter to congratulate her former partner, writing, "Congrats to Jason and the entire Ted Lasso family on your @CriticsChoice wins! @jasonsudeikis @hanwaddingham @brendanhunting @joekellyjk47 @VDOOZER! So happy for you guys." 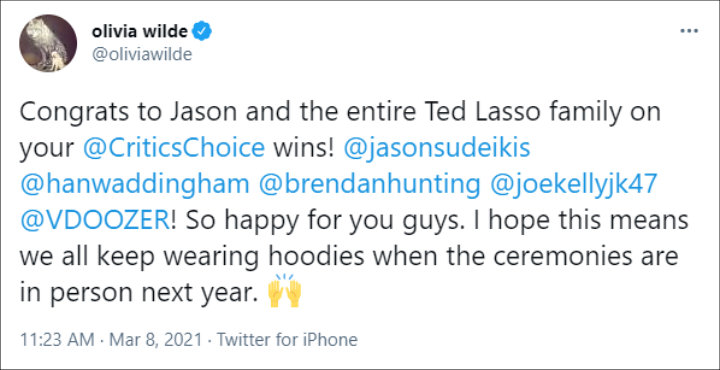 And in a nod to the casual attire again worn by her former partner - with whom she has kids Otis, six, and Daisy, four - to accept the award, a week after he donned a rainbow tie-dyed hoodie to the Golden Globe Awards, she added, "I hope this means we all keep wearing hoodies when the ceremonies are in person next year."