In a statement shared on Instagram, the tennis ace also calls out media for the 'systemic oppression and victimization' that take a toll on mental health after the Duchess of Sussex admits to having suicidal thoughts in the tell-all interview.

AceShowbiz - Serena Williams has spoken up in support of her best friend Meghan Markle following her wide-ranging interview with Oprah Winfrey. After CBS aired "Oprah with Meghan and Harry: A CBS Primetime Special" on Sunday, March 7, the tennis ace showed her support for the Duchess of Sussex through an Instagram post.

Calling Meghan a "selfless friend," the former world No. 1 female tennis player wrote, "Meghan Markle, my selfless friend, lives her life - and leads by example - with empathy and compassion. She teaches me every day what it means to be truly noble." Seemingly referring to Meghan's bombshell confession in the interview, Serena added, "Her words illustrate the pain and cruelty she's experienced."

She also defended Meghan against the media's negative portrayal of the former actress. "I know first hand the sexism and racism institutions and the media use to vilify women and people of color to minimize us, to break us down and demonize us," she continued. "We must recognize out obligation to decry malicious, unfounded gossip and tabloid journalism. The mental health consequences of systemic oppression and victimization are devastating, isolating and all too often lethal."

Serena, who is a mother to 3-year-old daughter Alexis Olympia Ohanian Jr., went on noting, "I want Meghan's daughter, my daughter and your daughter to live in a society that is drive by respect. Keep in your memory the fruitage of the spirit is love, joy, peace, long-suffering, kindness, goodness, faith, mildness, self-control. Against such things there is no law."

In the caption, the 39-year-old athlete continued to sing praise for "brave" Meghan. "I am so proud of you for being so brave. I know it is never easy," she wrote, adding a shout-out to Meghan's husband Prince Harry as well, "You are strong- both you and Harry. I love you. I adore you. Your friend S."

Serena isn't the only public figure who has spoken up in defense of Meghan following the highly-anticipated interview. Inaugural poet Amanda Gorman tweeted, "Meghan is living the life Diana should have, if only those around her had been as brave as she was. Meghan isn't living a life without pain, but a life without a prison."

"This isn't Meghan's princess 'happy' ending. But sometimes change, the decisions that bring us the most hurt, aren't about about happiness, but healing," she added. "Unclear if this will change the Royal family, but Meghan's strength will certainly redefine family everywhere. Think of the women who will be inspired to stand up for their lives, the partners who will be kinder & more courageous than the kin they were born into." 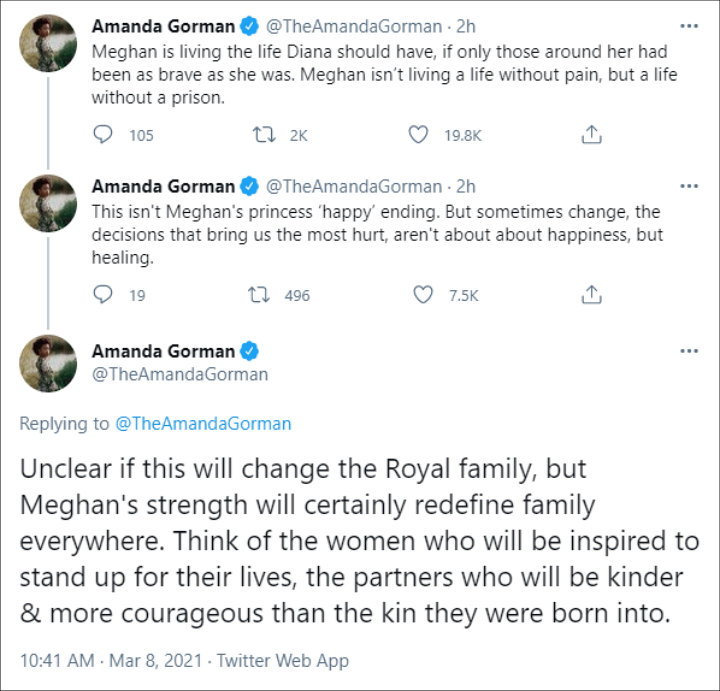 In the tell-all interview with Oprah, Meghan came clean about the pressure she endured while living under the supervision of the British royals. She claimed that the royal family was concerned about the skin color that her and Harry's son might have and admitted the pressure and public scrutiny took a toll on her mental health, even pushing her to the brink of suicide.

"Look, I was really ashamed to have to say it at the time and ashamed to have to admit it to Harry especially, but I knew that if I didn't say that I would do it. I just didn't want to be alive anymore," she said in the interview.