Calling out the Philly rapper for his lack of 'respect and tact' in making reference to her late husband's helicopter crash, Vanessa says 'there's a better way' to honor the NBA legend.

AceShowbiz - Kobe Bryant's widow Vanessa Bryant has broken her silence on Meek Mill's controversial lyric about her late husband. Feeling offended by the rapper's reference to the helicopter crash that killed the former NBA star and one of their daughters, the mother of four called out the Dream Chasers Records founder for his lack of "respect and tact."

Vanessa posted on her Instagram Story on Monday, February 22 Meek's line in his unreleased collaboration with Lil Baby that she found "insensitive and disrespectful." It read, "Yeah, and if I ever lack, I'm goin' out with my chopper, it be another Kobe."

The 38-year-old widow expressed her feelings below the lyric, writing, "Dear @meekmill , I find this line to be extremely insensitive and disrespectful. Period. I am familiar with any of your music, but I believe you can do better than this."

Responding to Meek's claim that he's actually a fan of Kobe, Vanessa went on advising the rapper, "If you are a fan, fine, there's a better way to show your admiration for my husband. This lacks respect and tact."

Shortly after Vanessa posted her statement on Meek's lyric, the "Amen" hitmaker tweeted, "I'm going back savage in this s**t ... f#%k ya feelings!" He added in separate tweets, "Ion trust people gotta play it raw ...... Head taps for n#%ga tryna pull my card!" It's unclear though if he wrote the tweets in response to Vanessa's message. 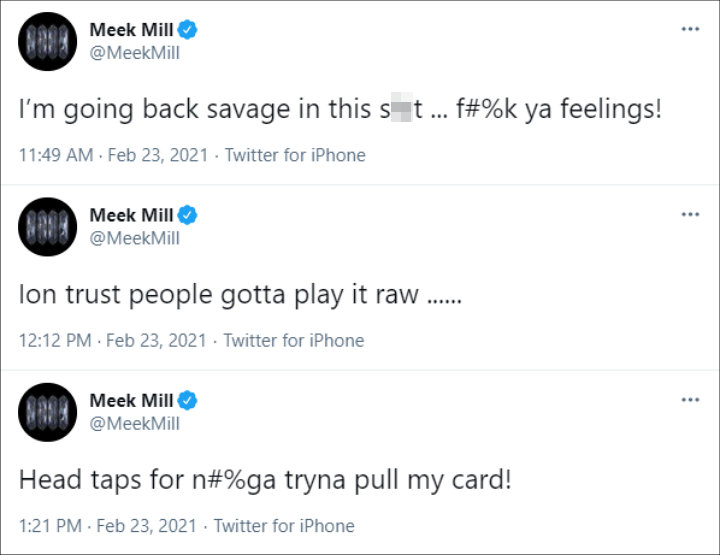 Meek Mill tweeted after Vanessa Bryant called him out over 'insensitive' Kobe lyric.

Meek previously defended himself after he landed in hot water over the lyric referencing Kobe's death. "somebody promo a narrative and y'all follow it.... y'all internet antics cannot stop me ....s**t like zombie land or something! Lol," he wrote on Thursday, February 18.

The 33-year-old star went on comparing the backlash to "mind control" as he wrote in a separate tweet, "They paying to influence y'all now ... its almost like mind control 'wake up.' " He also posted a picture of a hat with Kobe and Gianna's names on it, seemingly to show that he's a fan of the late NBA legend.