The former First Lady also blasts CNN for its report that claims she was spending her days at the spa following the Capitol riots, slamming the network for 'unhealthy obsession' towards her.

AceShowbiz - Melania Trump celebrated Valentine's Day on Sunday, February 14 with a sweet message on her Twitter account. While the post was heartwarming, the former First Lady failed to mention her husband Donald Trump on the post.

Melania posted a slew of pictures of her spending time with inspirational children at The Children's Inn, a resource for victims of domestic violence and child abuse. The ex-model wrote in the caption, "On this #ValentinesDay, I think of the brave & inspirational children at @TheChildrensInn @NIH where I visited the past few years. Sending them love & strength, today & everyday. #HappyValentinesDay." 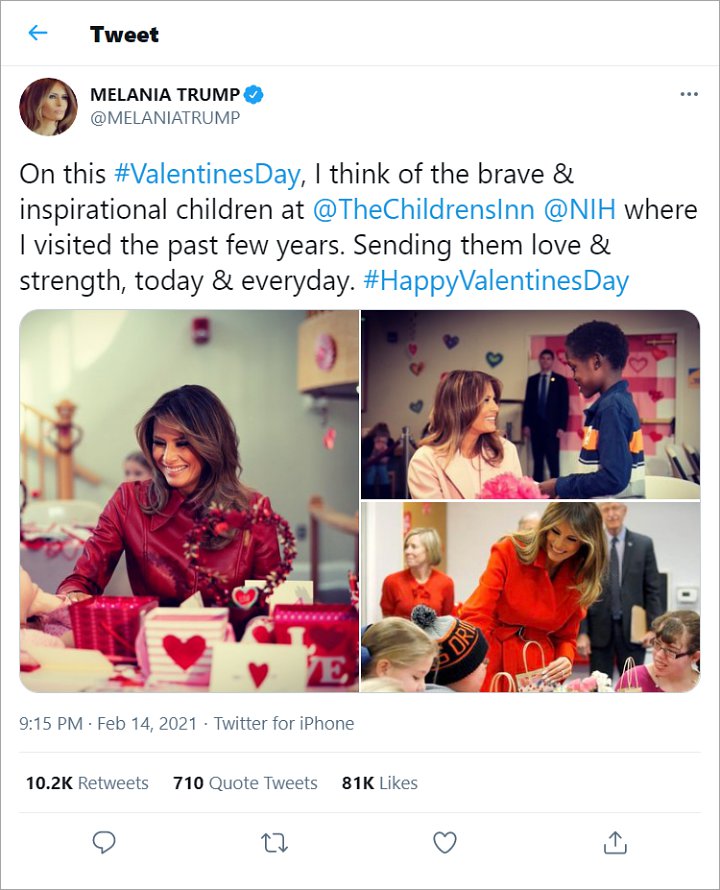 It arrives after it was reported that Melania and Donald's marriage went south after his presidential time ended. However, Melania's former BFF Stephanie Winston Wolkoff revealed Melanie and the former POTUS had more in common that most people might think. "A Trump is a Trump is a Trump is a Trump," the "Melania and Me" author explained on the HollywoodLife Podcast. "I thought Melania was different than the rest. She's not, but I believed, just as these people believe Donald when he tells them something over and over… I had to learn the hard way that she is a Trump."

Stephanie went on to say, "There's this understanding I guess, but it's more of a look [between them]… I believe their way of showing affection towards one another is her telling him how wonderful and great he is."

She then recalled when she "was in the car with her and we were coming back to New York from DC and Donald was at a rally." Stephanie detailed, "She was always his first phone call, always, no matter where she was. And the first thing he'd say was 'Hey Baby, how'd I do?' Like he wants her approval."

In other news, Melania's office slammed a report by CNN that claimed she was spending her days at the spa and was "bitter and chilly" towards Donald following the Capitol riots. "Mrs Trump is no longer First Lady. She is a private citizen, mother, & wife. Sources in this article are not affiliated [with] her nor have insight into her thoughts or daily life," the Office of Melania Trump wrote on Twitter on Saturday. "CNN's FLOTUS Correspondent choosing to publish false gossip illustrates the media's unhealthy obsession."