Natalie Portman Gets Fired Up Over False Pregnancy Speculation

The 'Thor: Love and Thunder' actress slams a news outlet for starting rumors about her possible pregnancy based on her physical appearance when she was recently spotted in Sydney.

AceShowbiz - While Natalie Portman isn't one who is usually driven by her impulse to post something on social media, she couldn't help losing her cool after noticing recent reports about her. The actress fired back at a news outlet for spreading false rumors about her possible pregnancy based on her physical appearance.

On Friday, February 5, the "Black Swan" star took to Instagram Story to clap back at the pregnancy speculation. "Hey, so I'm totally not pregnant...," so the 39-year-old wrote, "...but apparently it's still OK in 2021 for anyone to speculate and comment on a woman's body shape whenever they want?" She then took a direct shot at the online publication which first reported her supposed "baby bump," adding, "Do better @nypost." 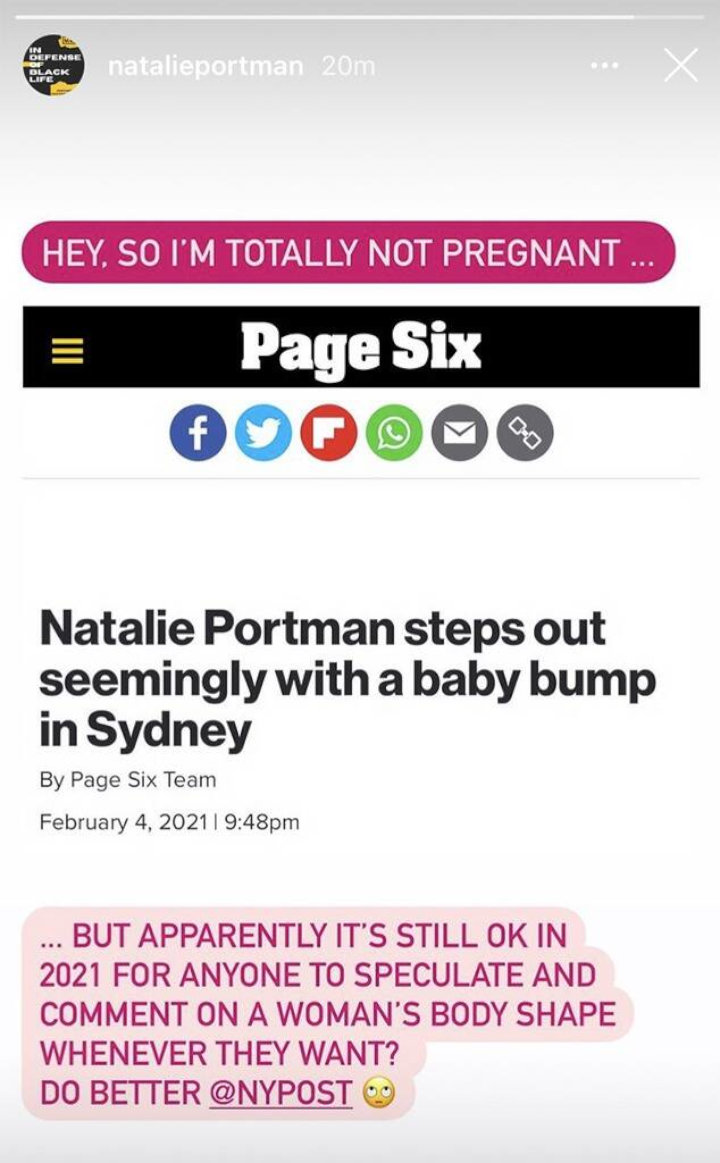 Natalie's post was in response to Page Six's article which included the Oscar-winning actress' paparazzi pictures when she was spotted stepping out in Sydney, Australia on Thursday, February 4. The Jewish star, who has been Down Under to film "Thor: Love and Thunder", wore a blue tank top and leggings while apparently ready to hit the gym.

Natalie also sported a blue cap and had a blue sling bag while carrying her drink in plastic glass. Pointing out the "V for Vendetta" actress' protruding belly when she fixed her face mask, the site wrote that the actress "seemingly" had "a baby bump."

Further supporting its claim, the site noted that Natalie was wearing a baggy hoodie when she filmed "Love and Thunder" earlier in the week, "which either strengthens the case for a concealed pregnancy or side-steps it entirely." It added though, "(It's possible it was cold that day.)"

While Natalie isn't expecting another child anytime soon, the actress is already a mother of two. She welcomed her first child with husband Benjamin Millepied, a son named Aleph, in 2011. Their second child, a daughter named Amalia, was born in 2017.