The 'A Little Pain' singer has been facing backlash from the fans of the 'Better Together' hitmaker after she pointed out on his use of Confederate flag imagery earlier on in his career.

AceShowbiz - Singer Margo Price has criticized fellow country star Luke Combs for insisting his new unity song "isn't meant to be political", noting his use of Confederate flag imagery earlier on in his career.

Combs has teamed up with Billy Strings for bluegrass song "The Great Divide", on which they call for people to overcome their differences and "find a way across the great divide", amid a period of high political and racial tensions across America.

Announcing the new track, Combs wrote on Twitter, "I thought now was a good time to put this song out with everything that has been and is going on in the world."

"It isn't meant to be political or try and tell you what to think or believe; that's not my job. It's just me saying how I felt when I wrote it and I wanted y'all to hear it (sic)...". 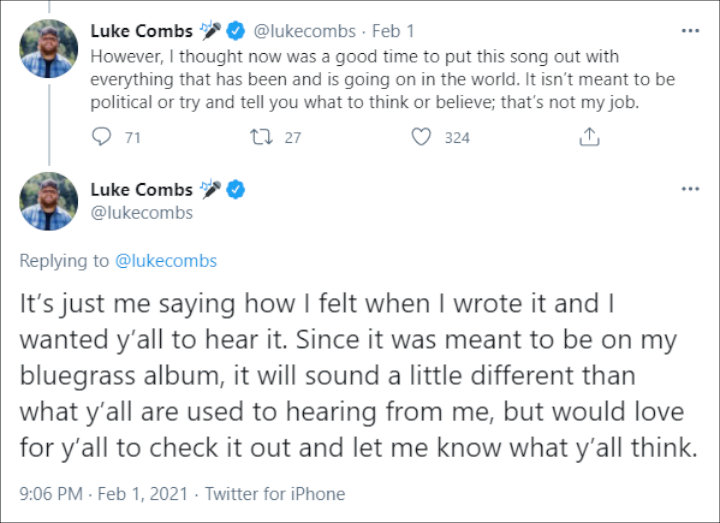 Luke Combs claimed he did not meant to be political through new song 'The Great Divide'.

However, his statement has irked Price because Combs hasn't been shy to display the Confederate flag, which has long been associated with white supremacy, onstage and in his work in the past, with one such sticker prominently featured on an old guitar, which she highlighted in a Twitter message on Tuesday, February 2.

She captioned the post, "when people say 'they don't want to be political'... smdh (shaking my d**n head)". 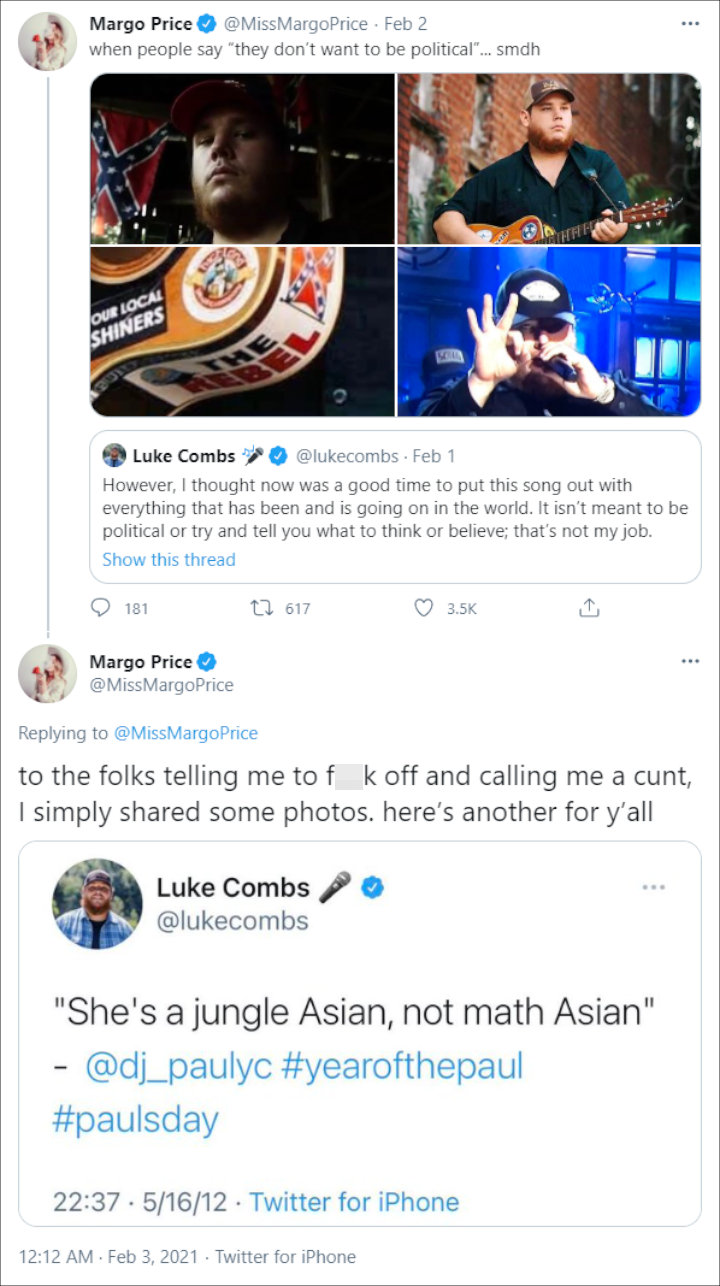 Margo Price hit back at backlash caused by her criticism at Luke Combs.

Price faced some backlash from Combs' fans, who insisted he hasn't used the instrument in years, but she refused to stand down, and instead shared a screenshot of a racially-insensitive Twitter post from the "Beautiful Crazy" hitmaker's timeline in 2012.

"to the folks telling me to f**k off and calling me a c**t, I simply shared some photos. here's another for y'all," she wrote, as she showed off the old tweet, in which Combs had posted, "She's a jungle Asian, not math Asian" - @dj_paulyc #yearofthepaul #paulsday".

No context for the tweet was given, but fans were quick to weigh in, with some voicing their shock and others insisting Combs is a changed man.

He has yet to respond to the online attack.

Margo Price Gets Candid on Decision to Quit Drinking: I Don't Miss Alcohol at All