Sabrina Peterson, who claims that Tip once held a gun to her head, slams the 'Whatever You Like' rapper's wife for allegedly turning her back on her after she stood up for Tiny.

AceShowbiz - T.I.'s accuser Sabrina Peterson has spoken up after Tameka Cottle a.k.a. Tiny Harris accused her of lying about abuse allegations against Tiny's husband. Standing on what she's said about the rapper, she insisted that she told the truth.

In a video posted on her Instagram page on Tuesday, January 26, Sabrina claimed she found it "hurtful and disheartening" that "the woman I stood for, whose back I had, now turned around and saying the things you're saying." She went on labeling the reality TV star as "disgusting."

One day prior, Sabrina accused T.I. of abuse as she made a plea to the mayor of Atlanta to stop using the rapper as a positive role model in the community. "The sad part about being a woman & BEING A BLACK WOMAN IS THIS! The public PRAISES OUR PREDATORS! @troubleman31 you PUT A GUN TO MY HEAD IN FRONT OF CHILDREN & I NEVER CALLED THE POLICE ON YOU! But for years you have painted me as the VILLAIN! AS BLACK WOMEN!" she posted on Monday, January 25.

"It's hard to heal from RAPE, VIOLENCE OR ANYTHING BECAUSE YOU ARE PAINTED AS THE PROBLEM OR REASON THIS HAS HAPPENED TO YOU!" so she claimed. "LETS NORMALIZE THE ALLOWING BLACK WOMEN TO HEAL! It's so hard being the VICTIM OF RAPE & BEING PAINTED AS THE REASON IT HAPPENED!"

Calling for Atlanta Mayor Keisha Lance Bottoms' attention, Sabrina added, "LETS TALK! @keishabottoms YOU CANT HAVE A PERSON THAT HAS VICTIMIZED WOMEN SPEAK FOR US! Lets have a real TALK!"

She also reposted on her Instagram Story a post by another woman, who claimed to be a victim of T.I. as well. The woman named Nicole Lynnae Sullivan reacted to Sabrina's story by sharing her own experience with the rapper.

"You know what's crazy, one of y'all favorite rappers in the game did the same exact thing to me in 2017," so Nicole wrote. "And I never called the police either (per usual prior to 2019), nor wayy back when I was nice, but let a mf try me today thooooo! A lot of mfs owe me they life, lol. Mannn. Next time take it." 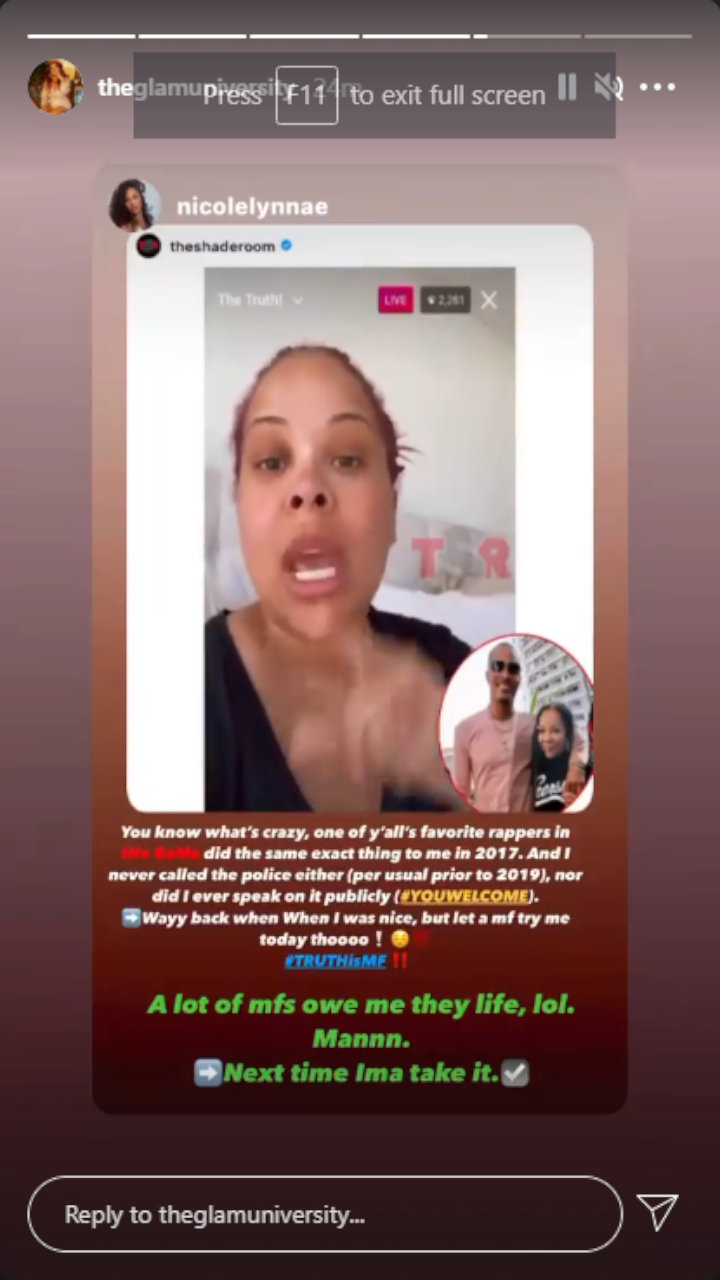 Sabrina Peterson resposted Story by another alleged victim of T.I.

While T.I. has not responded to Sabrina's allegations, his wife Tiny has come to his defense. The former Xscape member clapped back at her husband's accuser, "Hold up... So you want your abuser to train your sons? He was just uncle 2 years ago ... now when did you say my husband assaulted you?"

She went on questioning Sabrina's claims, "Did you change your mind or change it back? What's up wit you today Pooh? I'm confused. Stop harassing My Family. You strange. Everybody know you been special (face slicing seminar lady). Please Get help. But LEAVE US ALONE!!"

Supporting Tiny's claim, gossip blog Gossip of the City said that Sabrina has been stalking Tiny and "been making up stuff." The accuser allegedly called Tiny her "sister" just months ago and "she pretended for almost a year that Tiny was her best friend but it was all lies. Don't believe the hype," it noted.

One of T.I. and Tiny's Accusers Has Hired Famed Celebrity Lawyer Lisa Bloom