The '102 Dalmatians' actress reveals through a social media post that her husband of 20 years did not give her any explanation about his declaration other than he 'no longer loves' her.

AceShowbiz - Alice Evans has been left "confused and sad" after Ioan Gruffudd, her partner of 20 years, announced that he's decided to leave their family.

Actress Alice broke the news to fans on her Twitter page, explaining that "Fantastic Four" star Ioan had given very few details about his decision - other than that he "no longer loves" her.

"Sad news. My beloved husband/soulmate of 20 years, Ioan Gruffudd, has announced he is to leave his family, starting next week," she wrote. "Me and our young daughters girls are very confused and sad. We haven't been given a reason except that he 'no longer loves me.' I'm so sorry." 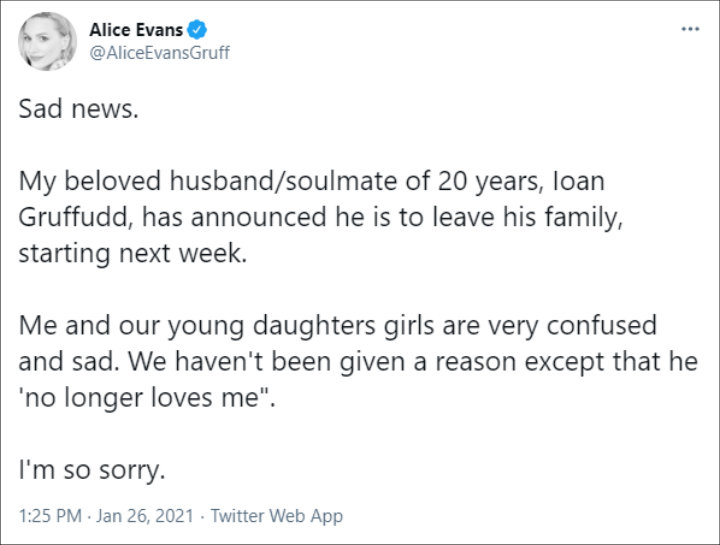 Alice Evans revealed Ioan Gruffudd has decided to leave her and their young daughters.
See also...

Alice and Ioan met while starring together in the film "102 Dalmatians". They married in 2007 and are parents to daughters Ella, 11, and Elsie, seven.

Last year, Ioan spoke highly of his wife for speaking out against Harvey Weinstein. "I was very proud of Alice. Because women were not being believed," he said in February 2020.

"She wanted to say, 'No, this is definitely his modus operandi. This is how he behaves. I've witnessed it.' So she wanted to present the case, help bolster the case," he continued.

As well as starring as Mister Fantastic in the "Fantastic Four" movies, Ioan has appeared in films such as "W." and "Ava", as well as on TV shows such as "Forever" and "Ringer". He currently stars in leading role on ABC's series "Harrow", which has been renewed for a third season scheduled to start on February 7.

Trey Songz Pokes Fun at Arrest After Released From Jail