The 'Shotta Flow' hitmaker expresses his interest in the former 'Dancing with the Stars' contestant after she confirms on Twitter that she's currently single.

AceShowbiz - Skai Jackson likely won't be having any trouble finding love again after her ugly split from Julez Smith. The 18-year-old actress has got at least one potential suitor lining up for her after she confirmed her single status.

Rapper NLE Choppa has shot his shot at the Zuri Ross of Disney Channel's series "Jessie" and its sequel "Bunk'd" after she responded to a fan's question on Twitter. The said fan professed his/her love for the star while asking, "@skaijackson if you ever see this I wanted to ask if you single because I fell in love with you this was hard to say."

Noticing the tweet, Skai spared some time to reply to the fan, "LMAOO, Yes I'm single for rn." Surprisingly, Skai's confirmation of her relationship status also excited Choppa, whose real name is Bryson Lashun Potts, as he responded with a cryptic tweet, "Umhm." 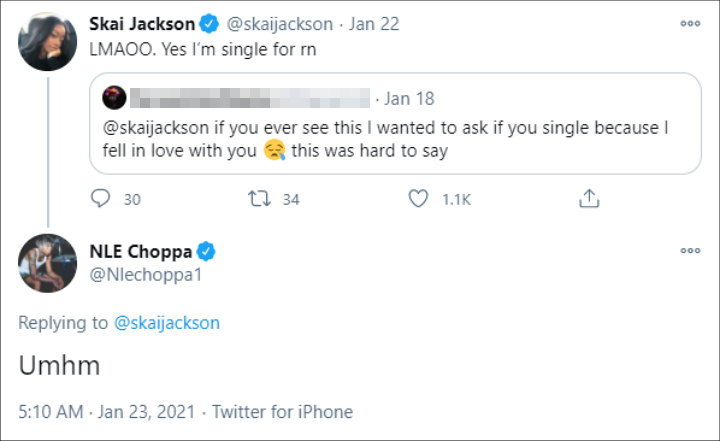 Seeing that a competition may begin between the fan and Choppa for Skai's heart, one user jokingly tweeted, "choppa fin take yo girl." Another was eager to see the outcome, writing, "s**t let the best man win."

Others, meanwhile, have already shipped Skai and Choppa, with one urging the "Walk Em Down" spitter, "U better get yo dream girl!! NOT HARD TO DM HER CHOP, SHE CANT SAY NO." Another encouraged the Compton native, "GO GET HER CHOP U BEEN WAITIN GRAPE!!!"

Someone else also gave her/his approval to Skai and Choppa's possible romantic relationship. "I actually would love to see them together they would look great and not only that he has developed more into a young man and she is just independent and a great individual with a bomb personality," the said fan reasoned.

Skai just broke up from Solange Knowles' son Daniel Julez J. Smith Jr., who is better known as Julez Smith. He aired out their relationship drama at the same time a private video that appeared to show Skai and Daniel getting down and dirty made its round on the internet.

Meanwhile, in leaked screenshots of a group chat, Julez accused Skai of cheating on him. "She cheated ofc i left," so the user, believed to be the 16-year-old nephew of Beyonce Knowles, wrote. When someone warned him about a possible lawsuit, he defiantly replied, "My aunt is beyonce you rlly think im gonna get sued take a next guess f**king idiot."

Skai didn't directly respond to the cheating allegations, but she appeared to clap back at her ex with a cryptic Instagram Story post. Alluding that he lied and framed her as a bad person to cover his own fault, she shared a quote which read, "People have to pretend you're a bad person so they don't feel guilty about the things they did to you."