It starts after a designer, who goes by @AnifaM on Twitter, posts a side-by-side pictures of her design and the one that is sold on Pretty Little Thing's website.

AceShowbiz - Teyana Taylor has just been appointed to be the new brand ambassador for fashion brand Pretty Little Thing, but she has already faced plagiarism accusations. One Twitter user called out the "We Got Love" singer for allegedly stealing looks from another designer for her brand.

It started after a designer, who goes by @AnifaM on the blue bird app, posted a side-by-side picture of her design and the one that is sold on Pretty Little Thing. While the color is different, both dresses featured a cut-out at the right chest. "I usually don’t speak on these things, however prettylittlenothing is trash for this," the designer wrote in the caption.

It was when the first user decided to take matters on her hand by tagging Teyana in a tweet which read, "how are you the creative director of PLT and you stealing from other black people?" The post didn't go unnoticed by the singer who quickly clapped back at the user.

"First off how are u going to ASSUME I have anything to do with this? My position barley started!" so Teyana claimed. "I JUST announced my new title only a month ago, I have not even officially started my CD role as of yet. So check ya self & most IMPORTANTLY ya tone before u come at me loud & wrong." 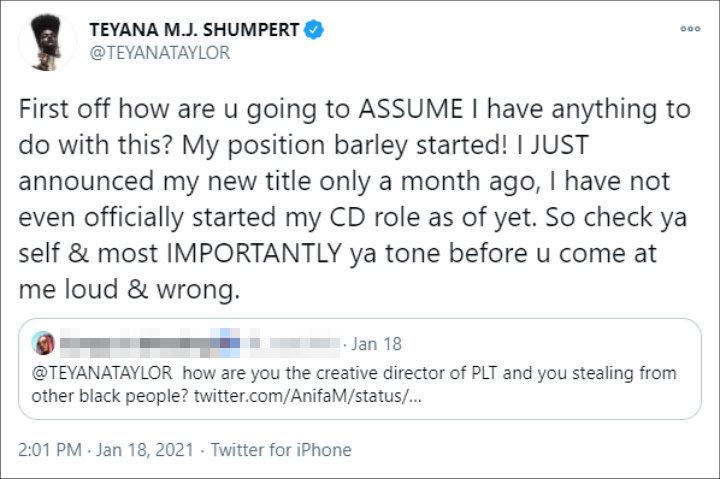 Teyana Taylor fired back after being accused of stealing design.

Prior to this, Megan Thee Stallion also faced the same accusation. A designer named Aazhia shared on her Instagram page a picture of her clothing items next to a piece from Megan's Fashion Nova collection. "IMA BREAK THIS DOWN REAL SIMPLE! MY DRESS WAS STOLEN AND USED IN THIS MEGAN X FN COLLAB! WAS I TOLD? NO! WAS I COMPENSATED? NO!" so Aazia wrote in November 2020.

"CRAZY THING IS HER TEAM ACTUALLY REQUESTED THIS DRESS FOR A PULL FOR HER! HER AND HER TEAM ARE COMPLETELY AWARE OF BRAND AND THIS WAS APPROVED BY HER! I'M VERY MUCH SO TAKEN BACK BY THE THE LACK OF RESPECT FOR ANOTHER BLACK WOMAN!" she added.

Megan, however, denied the claims. "A lot of times people say that they talked to somebody from my team," the "Savage" hitmaker said on "The Morning Hustle". "I don't know what year that was. What are you talking about? And a lot of times they won't even bring me--they don't tell me who they talkin' to. I'll probably never hear you... But, it's been a dress that has been done a lot over the years. So, I feel bad that people's initial reaction would be to just come at me like, 'Oh you a Black woman and you stealing from Black women.' I'm like damn, hold on. I don't know you."