Less than two weeks before the first anniversary of her husband and daughter's death, Vanessa Bryant shares words of encouragement to 'people struggling with grief and heartbreaking loss.'

AceShowbiz - Kobe Bryant's widow is still trying to overcome her grief nearly a year after her husband and daughter were tragically killed in a helicopter accident. Ahead of the late NBA star and Gianna's one-year death anniversary, Vanessa Bryant confessed that she has been struggling to find a reason to live.

Making use of Instagram Story on Friday, January 15, the 38-year-old got candid about her feelings. "Let me be real - Grief is a messed up cluster of emotions. One day you're in the moment laughing and the next day you don't feel like being alive," she began. "I want to say this for people struggling with grief and heartbreaking loss. Find your reason to live. I know it's hard."

The mother of four went on to add, "I look at my daughters and I try to push through that feeling for them. Death is guaranteed but living the rest of the day isn't." She then emphasized her words of encouragement, "Find your reason." 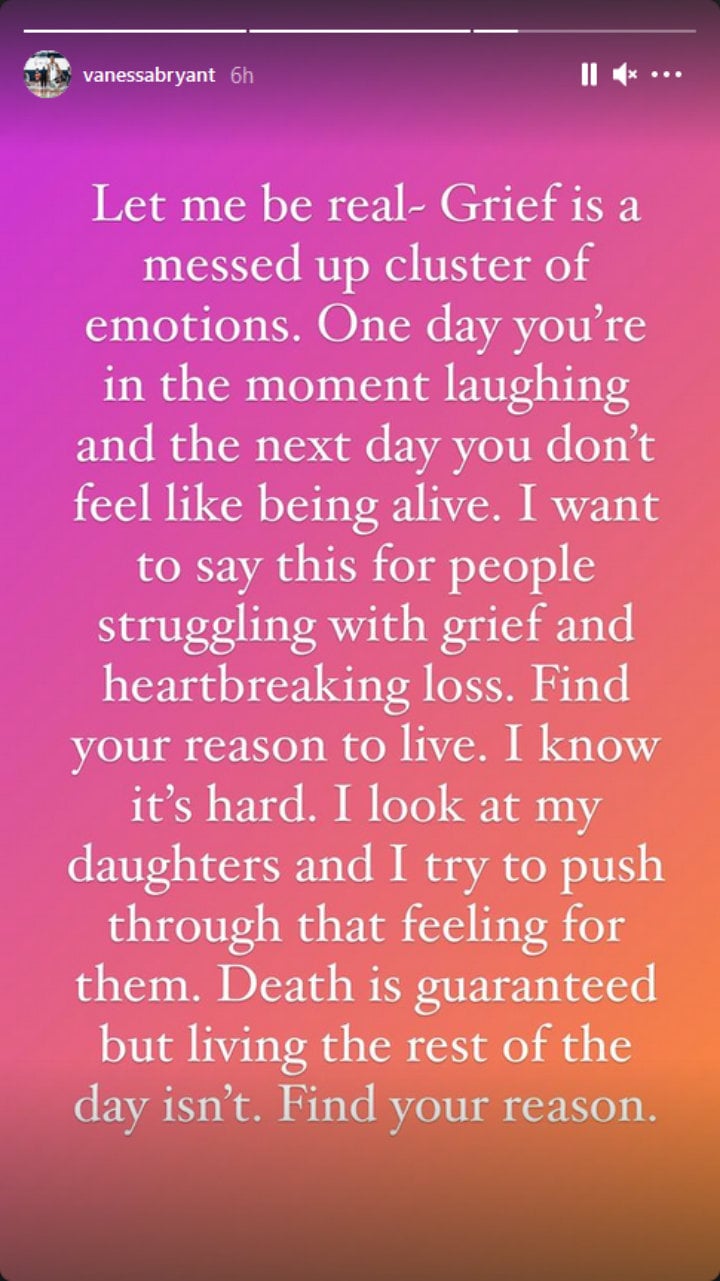 Vanessa Bryant got real about finding a reason to live following her husband and daughter's death.
See also...

Vanessa's post came a week after she shared on Instagram a throwback video of Kobe discussing love and marriage. "Happiness is such a beautiful journey. It has its ups and downs, whether it's marriage or a career, things are never perfect. But through love, we continue to persevere and move through it and get through that storm," he said in the clip.

Kobe continued, "And then another storm comes and guess what, you ride that one out, too. I think love is a certain determination and persistence to go through the good times and bad times with someone or something that you truly love." In the caption of the January 8 post, it is written, "I LOVE YOU @kobebryant Miss you and Gigi so much."

Kobe and his 13-year-old daughter, Gianna, passed away on January 26, 2020 when the helicopter they were on crashed in Calabasas, California. At that time, they were heading to a youth basketball tournament. Seven other people were also dead as a result of the accident.