Taylor Simone Ledward tearfully gushes over her late husband and the 'Black Panther' actor, who is honored with the Actor Tribute Award at the 30th Gotham Awards.

AceShowbiz - Chadwick Boseman's widow has spoken out publicly for the first time since he lost his battle with colon cancer. Five months after her husband passed away, Taylor Simone Ledward accepted the Actor Tribute award on his behalf at the 30th Gotham Awards, and fought back her tears in her speech.

Taylor delivered her emotional tribute in a video that aired during the Independent Filmmaker Project annual ceremony on Monday night, January 11. "As an artist, an actor and a person, Chad made a practice of telling the truth," she began her speech. "He is the most honest person I've ever met. Because he didn't just stop at speaking the truth."

"He actively searched for it - in himself, in those around him and in the moment. The truth can be a very easy thing for the self to avoid, but if one does not live in truth, then it's impossible to live in line with a divine purpose for your life. And so, it became how he lived his life, day in, day out, imperfect but determined," she added. "He was blessed to live many lives within his concentrated one."

"He developed his understanding of what it meant to be the one, the none and the all. 'A vessel to be poured into and out of,' he'd said. He harnessed the power of letting go, and letting God's love shine through. He realized that when one is able to recognize that when their strength does not come from themself, they rarely mess up," she went on. "That's what he was doing when he was acting. Modeling for us a path to true fulfillment."

Taylor additionally noted that it was an "honor to receive this award on behalf of my husband in acknowledgment of not only his profound work but of his impact on this industry and this world." She concluded her message by tearfully stating, "Chad, thank you. I love you. I am so proud of you. Keep shining your light on us. Thank you." 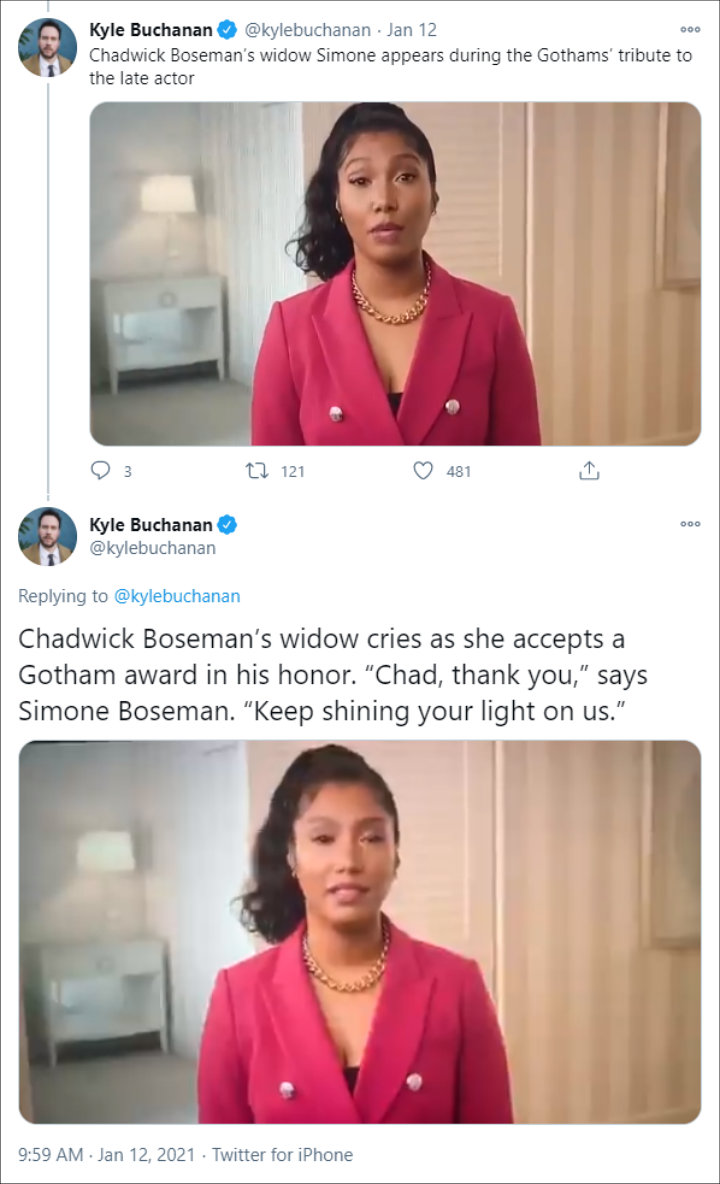 Chadwick died in late August 2020 after keeping his cancer battle a secret for four years. The "Black Panther" star was 43 at the time of his death.