Billy Ray Cyrus, who is featured in the song, also takes to Twitter to express his excitement as Lil Nas' 2018 debut single is 'now 14x platinum and the most certified song in music history.'

AceShowbiz - Lil Nas X is adding a new achievement to his records in the beginning of the new year. Upon learning that his "Old Town Road" has become the highest certified song in The Recording Industry Association of America (RIAA) history, the rapper took to social media to celebrate the major milestone.

The 21-year-old expressed his excitement via Twitter on Saturday, January 9. He tweeted, "OLD TOWN ROAD IS OFFICIALLY 14 TIMES PLATINUM! MOST PLATINUMS FOR ANY SONG EVER! LETS GOOO!" He also turned to Instagram to share the happy news, posting a throwback military picture of him and a screenshot of the news about his song success. 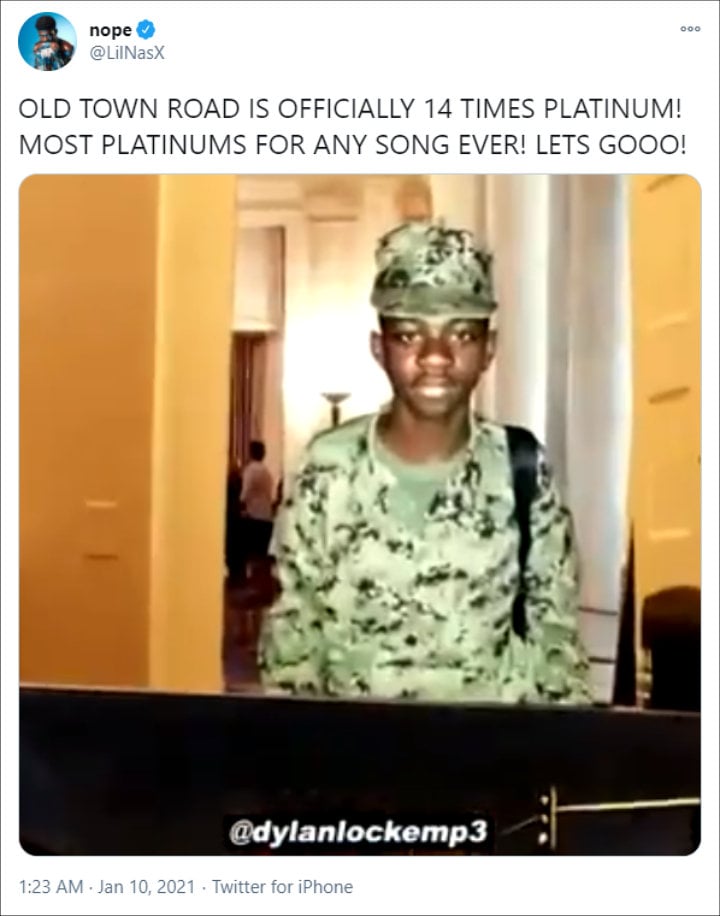 Nas X's post has since been flooded with congratulatory comments from his online devotees. One individual exclaimed, "CONGRATS ON GOLDDDDD." Another fan raved, "NAS I ACTUALLY LOVE YOU SO MUCH CONGRATS BOIII." A third additionally chimed in, "OMGGGGG CONGRATS MONT."

Also reacting to the news was Billy Ray Cyrus who is featured in the song. Making use of Twitter, he penned, "Incredible. I'm speechless. #OTR is now 14x platinum and the most certified song in music history. Thank YOU! @LilNasX @YoungKio @Dopebyaccident @theRonPerry @ColumbiaRecords @bolooki." 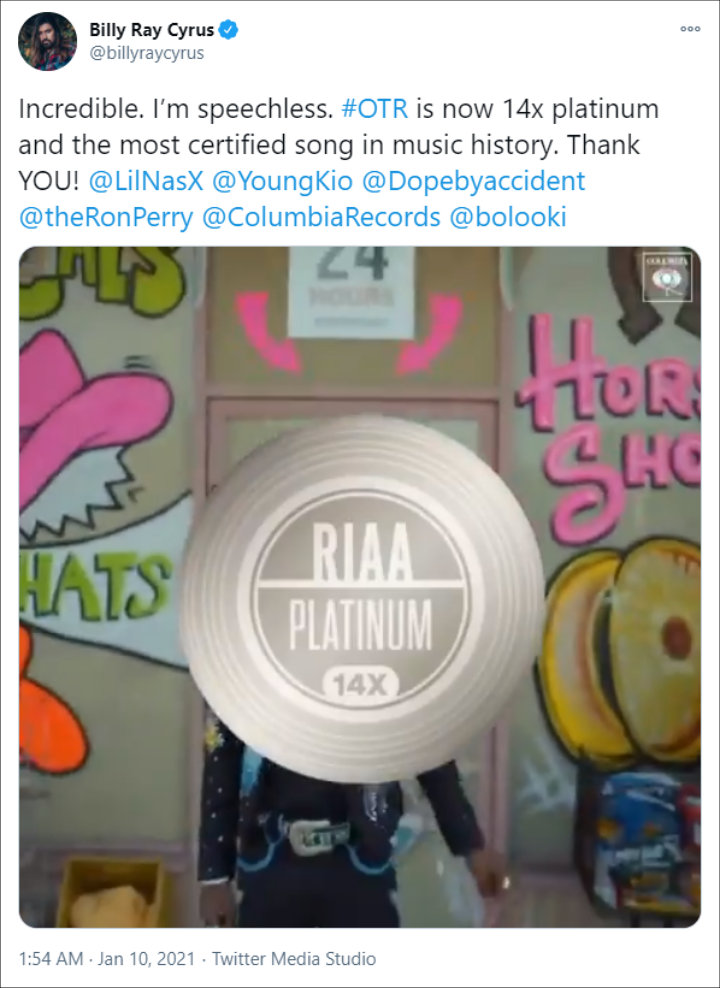 Nas X and Cyrus' collaboration "Old Town Road" was certified 14 times Platinum in the United States. The song has accumulated 14 million equivalent song units since its initial release in December 2018. In March 2019, the remix version with the country music legend was dropped and managed to stay on top of the Billboard Hot 100 after 18 weeks.

The latest recognition came more than a month after Nas X revealed that he was ready to move on and "throw out" the mega-hit single soon after its release. Speaking to Zane Lowe on Apple Music's "At Home With" series, he admitted, " 'Old Town Road' didn't stop being number one until August, I think, of 2019, and I was already ready to throw it out the window in June last year."

The hip-hop star went on to confess, "And I was so ready to move on from it because of what other people were saying that I almost missed out on even bigger blessings from it."